Razelikh the Defiler (whose true name is Rakh'likh)[1] is a dreadlord who served as Lord Kazzak's most fearsome lieutenant during the Third War. After the demons retreated to the Blasted Lands, he was instructed to secure the land and ultimately succeeded when he united the Shadow Council.[2] 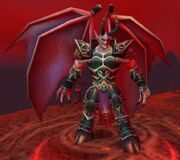 Besides being served by the death knight Ilifar and Felcular, Razelikh was protected by a triad composed by Grol the Destroyer, Lady Sevine, and Archmage Allistarj of the Shadowsworn. In exchange for their servitude, Razelikh granted each of them nearly unlimited power within the Blasted Lands. Each of Razelikh's underlings wears a third of an amulet of Razelikh's creation around their neck. The very same amulet is needed in order to summon the arch demon. The amulet pieces are each attuned to the lifeforce of their owner, granting them immortality. As long as they remain within the Blasted Lands, they cannot be slain, their life spans extended until the end of days.

There is only one way to harm the demon lord and his minions. A weapon of power must be forged bearing his true name: Rakh'likh. When such a weapon is forged, the demon and all under his command are vulnerable.

Razelikh's lair is atop the highest mountain in the Blasted Lands: the Rise of the Defiler. The only way to reach his lair is through the use of the teleport runes near the base of the mountain. Only by holding the amulet can one be transported to the peak.

The old quest chain to summon and kill Razelikh/Rakh'likh was one of the longest and most convoluted in the game, taking players from the Blasted Lands to Azshara and Stranglethorn Vale before returning them to the Blasted Lands for the final battle.

Though his servants were slain, Razelikh remained at large. The demon hunter Loramus sought to put an end to Razelikh but was slain by Grol the Destroyer, one of Razelikh's fallen servants.[3][4] Adventures later revive and empower Loramus and the two unite to battle against Razelikh. During the fight Loramus sacrifices his own life in order to help trap Razelikh's soul, claiming he will battle Razelikh in the next world.[5] 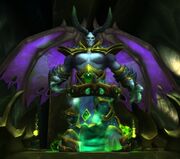 [Stone Knife of Sealing] that Loramus and Razelikh were trapped in was eventually destroyed, and their souls escaped only to be sent to the Twisting Nether. Within the Nether Razelikh's body reformed, with Loramus trapped inside and their souls entwined in eternal conflict. The next thing Loramus knew, they were expelled from the Nether and summoned to Azeroth by the Burning Legion. Loramus is now inside of Razelikh's body and joins the Illidari on the Fel Hammer. Razelikh sometimes takes control and threatens the Illidari, but Loramus is staying in a prison to keep Razelikh from attacking the others.[6]

The Illidari forces fought the soul of Razelikh.[7]

Removed from the game:

The battle is done single at the level quest without particular tactic.

He was previously level 57 elite.

He was immune to all debuffs/stuns, to all paladin judgements, warlocks DoTs (all curses,

[Fear], and also shadow and fire damage. The debuffs from the Enchanted Azsharite Felbane weapons didn't appear to affect him, just his minions.

During combat, Rakh'likh summons one of his minions, a Death Knight, then later his champion, a felguard. Between the two, he will do a powerful knockback which have the nasty habit of knocking the tank off the mountain. It has a five-second cast, so run away while he's charging up. If not, a quick charge can save your life. Pets are immune to the knockback, but a tank must prepare. Either the full length of the plateau (so the tank lands still on the plateau), or where there is a solid wall behind him to stop the flight. There are two common strategies to avoid him knocking the tank off the mountain which occurs at 50% health. (In addition to potentially wiping the group, can cause the tank to miss being able to loot the

[Severed Horn of the Defiler] if he gets knocked far enough away). First, there is a ledge below the top with the "Rune of Return" on it(It teleports you to [44,9, 55,3]

. If you can pull Razelikh to that ledge, the tank can place his back against the wall, negating the knockback. Secondly, when Razelikh is about to perform his knockback, he shout "Let the flames of chaos engulf you!". At this point, all melee can simply run out of range of the channeled knockback and avoid it completely.

Raze’likh the Defiler. Raze’likh is a powerful dreadlord who has claimed the Blasted Lands as his seat, and he steadily expands his influence, corrupting some of the Horde and Alliance’s best or turning them into monsters under his control. His enforcers are Allistarj, Sevine, and Grol.

Raze’likh’s most dangerous power is his ability to bind the souls of the fallen to a crystal, through some wicked spell of unknown origins. This grants the person — or rather, the body — bound to the crystal near immortality, but a complete lack of free will. Raze’likh has used this to begin creating an army of nigh-invulnerable guardians for his areas of interest, including the Dark Portal.[8]