Razor Hill is an orcish settlement built on a crossroads in central Durotar. The southern road eventually leads to Sen'jin Village and the Valley of Trials. The northern road leads to Orgrimmar, and the road west (now largely washed out by the Southfury Watershed) leads across the Southfury River to the Northern Barrens and eventually to the major Horde gathering point of the Crossroads. The Razor Hill Barracks is the single most prominent structure in the town. The town also has a burrow. Orgnil Soulscar is occupied with investigating the activities of the Burning Blade in the area. During the Darkspear Rebellion, Vol'jin captured the town from the Kor'kron and was using it to plan his attack.

Razor Hill is the major quest hub for those continuing from Sen'jin Village; after that players go to the Dranosh'ar Blockade. 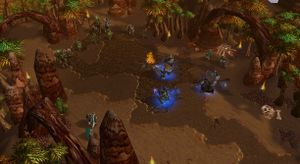 Shortly after the Third War, the forces of Kul Tiras arranged a summit with Thrall at Razor Hill, which was just a hill. It was, in fact, a planned ambush. However, having speculated this, Rexxar insisted that he should go in Thrall's place. In turn, Rexxar defeated the assassins.

Far north of the hill, an outpost containing Gar'Thok and a barracks existed. It is speculated that the two locations were merged in lore and is the current Razor Hill. Alternatively, a new outpost could be built on the hill.

During Garrosh Hellscream's reign as Warchief, he had his Kor'kron soldiers stationed at this town to protect the roads between Northern Barrens and Orgrimmar. When it was revealed that Vol'jin survived Garrosh's assassination attempt, through attacks on his supplies in the Barrens, Garrosh sent the Kor'kron to attack and destroy Sen'jin Village and all of their troll inhabitants.[2] When the Kor'kron failed in their attack and were driven away, they began regrouping at Razor Hill where they caged up anyone not willing to work with them, orcs included. But before the Kor'kron could fortify the town Vol'jin led his own army to take control of the town and push the Kor'kron out.

After this successful assault Vol'jin placed his base of operations at the Razor Hill Watchtower, where Baine Bloodhoof joined him and advised the troll leader to accept help from outside the Horde, due to the blood elves and Forsaken across the seas attending to other situations.[3]

The Alliance set fire to storehouses at Razor Hill.[4]

Razor Hill is a Horde-controlled town and one of the two major Horde outposts in Durotar. Its leader, Orgnil Soulscar, is occupied with investigating the Burning Blade.[5]