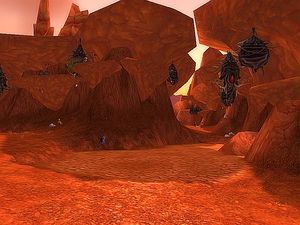 Razorwind Canyon is a nesting ground for the Dustwind harpies of Durotar. It is located in two areas, to the east and west of the main road leading between Razor Hill and Orgrimmar. There are entrances to it by taking paths right or left from that road just north of Razor Hill, or by the going to the north exit of that canyon and checking to the immediate right. Two other entrances from the west are near Tor'kren Farm[46.4, 30.4]

. An entrance to Drygulch Ravine is located in the eastern section of the canyon, through a cave [52.3, 27.3]

Adventurers should prepare themselves for battle before heading into this area, as the aggressive bird women are quite numerous through the canyon, and can quickly subdue or kill unwary travelers.

This area is primarily used for the quests

[9] Securing the Lines and

Tednug, who paces the road between Razor Hill and Orgrimmar, pauses on his walk to look into Razorwind Canyon. He then says, "Later," and moves on. This is a reference to the story 'You Awaken in Razor Hill', where the character Tednug is based upon expresses interest in 'dallying' with the harpies, but does not have time for it.[1]