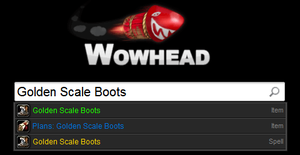 A recipe, sometimes also referred to as a blueprint,[1] refers to an action in which the player is capable of using a set of required ingredients (also known as reagents or materials) to make or produce an item, an enchantment, or in rare cases perform what can be considered a spell. Different types of recipes composes different crafting-professions.

It is often important to differ between whether a recipe is in item-form, or in spell-form, although they are highly related.

A simple overview of a recipe as an item.

A simple overview showing how to use a recipe as an item:
1. Acquire the recipe, fulfill the required conditions.
2. Simply click the recipe to learn it.
3. The recipe is automatically added to your profession.
4. You now know the recipe as a spell.

A recipe in form of an item is similar to what a recipe would look like in real life - it is simply an item which is capable of teaching the player how to make something. It does this by teaching the player the recipe in spell form. As such, recipes in the form of items will often be considered the "source" of a recipe rather than the recipe itself. Unlike real-life recipes however, a recipe in World of Warcraft will disappear when a player has "read" it. Notice that the expression "recipe as item" used here is not to be confused with the item the recipe (as a spell) has the ability to create (given it creates an item).

However, not every player may learn every recipe. As a player is limited to know two primary professions, in addition to all the secondary professions, a recipe-item is only available to him/her if the following conditions are met:

Having all kinds of sources, recipes may be found all over the world. A recipe may typically be obtained in one of these four ways:

In some cases a recipe may have more than one source. Notice that many high-level and/or powerful recipes are BoP.

Rarely, a recipe will not teach the player how to make an item, but instead a new proficiency level (aka "skill levels"). This type of recipe is however hardly ever used as they were made obsolete in patch 3.1.0.

As seen below in the next section, recipe-items are often named in a specific manner depending on which profession they are used in. The two exceptions are Alchemy and Cooking, in which a recipe is just referred to as a "recipe". In addition to naming, recipe-items are also often depicted in a similar manner. One type of recipe-items are usually having scrolls as icons, while another type may use paper sheets instead.

Although an important feature in professions, recipe names will usually (possibly only) be used when dealing with recipes in item-form. For example, when a player uses a

[Technique: Origami Rock] and learns how to create origami rocks, the ability to do so will not in any way (by the system) be mentioned as a "technique". This includes linking (see below). The same goes for the recipe-item icon.

It is however common to see recipe names either being used in a broader or narrower manner than the game uses them. An example of the former is how the Wowpedia article about engineering recipes describe all those recipes as "schematics", although just a handful of them are learned from recipe-items. An example of the latter is how players often refer to any kind of recipe as a "recipe", whether it is a technique, schematic, etc. A third example, which can be considered both broader and narrower at the same time, is that recipe names are, to an extent, interchangeable. It is not uncommon to see people referring to ANY recipe, be it jewelcrafting, alchemy, etc, as a "pattern", "plans", or "design".

Recipes often come in different colors (both icon and name), depending on their rarity. Although the system differs between different professions, a common rule is that recipe-items in white are "common" recipes that usually are bought from vendors, while any other colors are more uncommon recipes dropped by monsters or obtained from quests. Generally, the color of a recipe-item reflects the quality of the crafted item, and if the item is either unusual or powerful for its level, the recipe-item is often hard to obtain.

There are however several exceptions; some white Cooking recipe-items may for example be considered somewhat rare even though they are bought for less than a gold from easily accessible vendors, or are rewards from simple low-level quests. This is because many Cooking recipe-items are only obtainable by players playing as a Horde-character and vice versa, thus only allowing the opposite faction to learn the recipe by selling it the recipe-item in the neutral auction house. Another phenomenon is rare recipe-items often selling for quite the price between players even though the crafted item may be next to useless; this is because many players devoted to their profession seek to complete it as much as possible, even with useless items. Before selling a recipe-item, players therefore should always check the market to see what people are willing to pay.

A simple overview of a recipe as a spell.

A simple overview showing how to learn a recipe from a profession trainer:
1. Browse the trainer's recipes, select something which is available to you (the ones in gray are unavailable).
2. Simply click "Learn" to learn it (given you have enough money to buy it).
3. The recipe is automatically added to your profession.
4. You now know the recipe as a spell.

A recipe in spell form allows you to craft the item it describes, given you have the required ingredients. One may consider it the knowledge a person possesses to create something. Recipes in this form may be browsed in the profession-window, given the profession has one / is able to use recipes. Skinning, Herbalism, Fishing (despite the

[Weather-Beaten Journal]) do not have profession windows. Archaeology does, but due to its high difference from a "normal" crafting-profession it can be discussed whether it produces items through "recipes".

Most recipes start at orange (given they are learned as soon as they are available) and eventually turn yellow, green, and gray. As such, players are forced into learning new recipes one way or another to further improve their professions. Other recipes may begin at green or yellow, or even gray (meaning the recipe doesn't have any skillup-potential at all). You can check the skillup-potential of a recipe on a WoW-database such as Wowhead, as seen here (to the right) (external link) and here (top right) (external link). For example, 385 425 437 450 means that the recipe can be learned at skill 385, at which it is orange, becomes yellow at 425, green at 437, and gray at 450. Having knowledge of recipes' skillup-potentials, as well as choosing recipes requiring cheap materials, is an important part of economic profession-power leveling (if the profession uses recipes, of course).

Notably, only a portion of the recipe-spells a player knows is taught by recipe-items, meaning that the other recipes have other "sources". Many of these recipes are also taught by profession trainers. These can be found all over the game, in every capital city and often in small villages as well.

A few recipes are taught from other sources as well. These sources are:

Even if a NPC which teaches you a recipe is not a "real" profession trainer (possibly just a quest giver), it can still be considered a trainer.

Recipes known as spells are automatically and conveniently categorized in a number of different sections. It is furthermore easy to search for and browse in known recipes by using the different filters or having the profession search for items with matching letters and names. The categories and types of filters differ between professions.

It is also possible to link a recipe as a spell in chat. This is done by opening a chat command line, shift-clicking the recipe in your profession window (which causes the recipe to create a link) and then posting the message normally.

In a few special cases, performing a recipe (as in making an item, not learning it) has a chance of teaching the player another recipe in the same profession. This may be considered a third method to gain new recipes, but only exists in a few professions. Recipes learned like this are not "revealed" before you know them; you won't know what you'll learn (or even if you will learn anything at all) before the moment you do so. This way of learning recipes is referred to as "discovery".

Inscription uses "researches" to learn new recipes. When you "craft" any of them, you will learn how to make a new type of glyph. Notably, both have a cooldown which resets every day, meaning each can only be performed once each day. This is to prevent players from learning everything at once.

Alchemy uses two kinds of "discovery", one in which the player creates different items and another where the player performs a research.

Below is a macro which can be used to quickly tell you the number of recipes you know in a profession. In order to "adjust" it to the profession you want to check, replace the word PROFESSION with the name of the profession, such as engineering. Then, execute the macro. The result will be displayed in your chat window.

The macro works by counting the "available" recipes listed, which means it is affected by filters. If you for example have materials in your inventory which can be used to create 5 different recipes, turn on the filter for "have materials" and then execute this macro, it will calculate that you know 5 recipes.

It sometimes gives you an incorrect number if you run it without having the profession's window displayed, possible due to the counting finishing faster than the list of recipes can load. As such, it's better to open the profession window and then run the macro in order to receive an accurate calculation.

The macro can also be used to calculate the number of recipes in a profession known by another player in your guild. In order to see a guild member's profession window, open your guild roster, filter after professions, select the specific profession and then select the player.