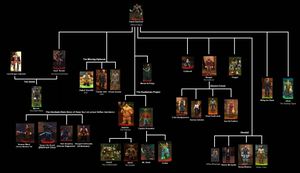 The following is a composite account of all known activities of the Defias Brotherhood up to and including their involvement in the World of Warcraft game. Almost everything listed below either occurs or is otherwise documented in-game.

Origins of the Brotherhood

Conquest of Westfall and Elwynn

The Brotherhood After VanCleef

A Note About Timing

The quest system in World of WarCraft unfortunately gives little indication of time, and so the general time frame for the above events is largely subject to speculation. The later portion of the events, however, from VanCleef's death on, probably occur within a very short time of one another. Both The Stockade Riots and The Attack clearly occur soon after VanCleef's death, since Marzon and Lescovar do not appear to have heard that VanCleef is dead. Then, when Lady Prestor receives Lescovar's killer following The Attack, the King is already missing, meaning the Missing Diplomat chain is intended to occur around the same time (perhaps immediately after). It can be further inferred that while the kidnapping was carried out after the Deadmines project fell apart with VanCleef's death, the abduction was planned well before that time and therefore was likely VanCleef's brainchild.

Compared to these two plots, both of which threaten all of Stormwind, it would appear that the Stockade uprising organized by Thredd and Lescovar was intended merely as a side project, which explains why VanCleef did not have a very heavy hand in it.