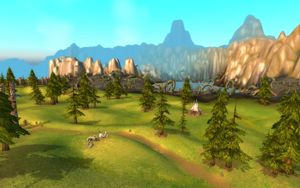 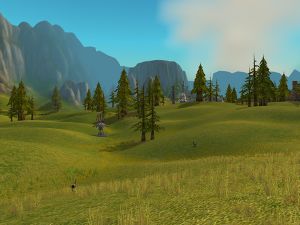 Red Cloud Mesa is the name for the rolling plains atop the high cliffs in southern Mulgore. Here, young tauren adventurers prove themselves by helping drive back the invading Bristleback quilboars. Camp Narache in the northwest portion of the Mesa is the last safe area on the mesa.

Once known for being a place of peaceful, serene beauty, Red Cloud Mesa has suffered visibly after coming under siege by the Bristleback quilboar. The quilboar spread out from their home of Brambleblade Ravine in the northeast, growing twisting, thorned vines on every piece of new territory they snatched. Burned out tauren huts line the warzone in which they fight against the tauren braves, and the water well formerly used in the area has been destroyed.

At the southwest corner, the former pass out of the mesa has been destroyed by a landslide and taken over by the leader of the quilboar, who created it into an area now known as Thornmantle's Hideout. A new exit leading down from the mesa was carved out of the hillside just north of Camp Narache. There is also a path leading up from the graveyard west of Camp Narache, to the top of Fargaze Mesa.

Redrock Mesa is a training ground found along Mulgore's northern border in the foothills of the Stonetalon Mountains. It is used to train young tauren in hunting skills and combat to make them prominent warriors within tauren society.[1]