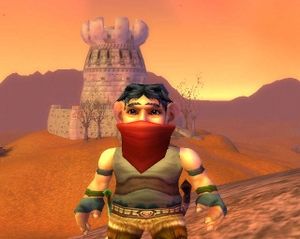 The Red Defias Mask drops from members of the Defias Brotherhood throughout Westfall. It is also dropped by Grave Robbers patrolling the Raven Hill Cemetery in northwest Duskwood.

This item is a head item that can only be used by rogues. It does not have an armor value and Defias thieves will still attack you if you're wearing it, so it can be described as a pure fashion accessory.

It is dropped by members of the Defias Brotherhood in Westfall in the Eastern Kingdoms; it also drops in the Deadmines instance. Because the item drops in mostly Alliance territory it was difficult, but not impossible, for Horde members to get the mask. Prior to patch 3.3, the easiest way for Horde players to get one seems to be to get a group for Deadmines, take a zeppelin to Grom'gol Base Camp, jump off the zeppelin into the water and swim north until you land on the shore of Westfall. From there, head towards Moonbrook (it has an arrow on your mini-map). You can either kill the Defias mobs in Moonbrook or Deadmines. It has a 1% - 2% chance to drop. This is best done at around level 10 - 20, as Deadmines drops some great gear.