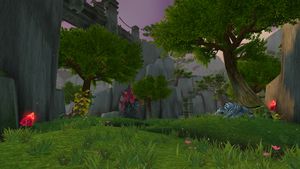 Outside the valley, Mossgreen Lake lies to the west, the Croaking Hollow is the beach to the southeast, Old Pi'jiu can be found southwest, and the yaungol territories of the Firewalkers' Path, Firewalker Ruins, the Blazing Way, and the Shrine of the Black Flame all lie high up on the cliffs above.