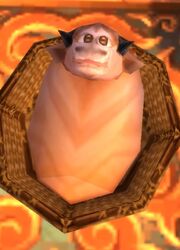 Redhorn is one of the twin sons of Sunwalker Dezco and Leza Dawnchaser. He and his brother, Cloudhoof, were born in the Krasarang Wilds and their mother died in childbirth.[1] Their father carried them with him at all times in baskets strapped to his back and chest. Redhorn is a "weaning name", and when he comes of age he will be given his true name. Dezco named his twins after a deceased old friend and a hero who helped him in the Krasarang Wilds, although it is not known which child received which name.

After barely surviving an attack from the Shao-Tien mogu, Redhorn was taken in by the Golden Lotus to be raised as a part of their order.[2]

After the defilement of the Vale, Redhorn was left in the care of Mokimo in the Shrine of Two Moons.

At some point, Redhorn was given the name Kor, and his father journeyed to the Shadowlands to inform his mother of him.

Redhorn is not intended to be the child's true name: the Dawnchaser tribe carries a rare tradition of giving weaning names to children, until they are old enough to receive a true name.[3]

Redhorn is likely to take the name of Dezco's friend Kor Bloodtusk, since his other son was killed. This would be the simplest option should Redhorn ever show up again, as naming a character after the player creates the problem of what their canon name would be.