From Wowpedia
(Redirected from Redridge)
Jump to: navigation, search

For the Warcraft: Orcs & Humans Orc campaign mission of the same name, see The Red Ridge Mountains (WC1 Orc). For the lore of the zone and its status before the Cataclysm, see Redridge Mountains (Classic).

The Redridge Mountains (also known as the Red Ridge Mountains,[1][2] the Redridge Range,[3] or simply Redridge)[4] are located east of Elwynn Forest, northeast of Duskwood, and south of the Burning Steppes. Although it may be considered contested, Horde characters have no settlements or NPCs and it is thus a place they use mostly for passing through to reach Flame Crest or Stonard.

An idyllic region of rushing rivers, towering elms and rising elevations, the Redridge Mountains are under Stormwind's protection, and remain one of the last peaceful regions in Azeroth. Their inhabitants supply Stormwind with timber, fish, and crops. A force of Blackrock orcs from the Burning Steppes has secured Stonewatch Keep, but so far the orcs keep to themselves. In comparison with Westfall, Redridge is still relatively stable.

On the northern bank of Lake Everstill is the Alliance town of Lakeshire, the central hub for this faction's adventurers, offering many services and quests, as well as flight paths. As the town is under constant siege by gnolls and Blackrock orcs, its people are often victim of kidnappings or even killings and can be seen protesting at the Town Hall. Adventurers should use extreme caution around this town.

The enemy-held Stonewatch Keep and Tower of Ilgalar are connected with quests, but are also very dangerous and require a party to handle properly.

The crossroads known as the Three Corners, located in the southwest corner of the zone, connects the town of Lakeshire with Elwynn, Duskwood and, via the Lakeridge Highway, Stonewatch Keep. The highway itself is quite a dangerous place occupied by gnolls, murlocs, and wild animals. There are also a few camps located in Redridge — an orc camp in Render's Valley, Shadow Hide gnoll camps near the Tower of Ilgalar, and murloc camps near the lake. While the lake's surface appears peaceful enough, murlocs reside beneath the waves, and rumors of sightings of a sea monster persist. There are raptor nests in the Mountains.[5]

It's recommended that one wears a helmet when in the Redridge Mountains, as buzzards view humanoid hair as excellent nesting material.[6] 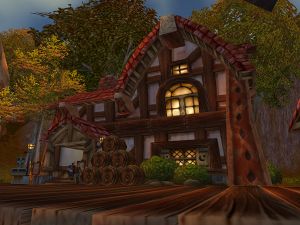 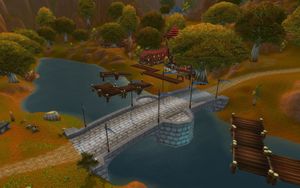 Geographically, the Redridge Mountains form the spine of the continent of Azeroth, although its many limbs and valleys have come to be known by separate, often ominous names such as 'Deadwind Pass'[7] and the 'Burning Steppes'. After the War of the Ancients, the dangerous and destructive Dragon Soul created by Deathwing was hidden beneath the Redridge Mountains. Protected by magical wards and Orastrasz, it would remain hidden for ten thousand years before Deathwing led the Dragonmaw clan there in dreams and visions.[8]

Although claimed by the humans,[9] the dwarven Dark Iron clan founded its own kingdom in the northern reaches, fleeing defeat in the War of the Three Hammers. Summoning the Firelord Ragnaros to aid them, their leader Thaurissan inadvertently caused the eruption of a new, immense volcano; Blackrock Mountain. This not only destroyed his clan's new city but utterly devastated the ecology of northern Redridge, forever leaving it an ash-choked wasteland.

The humans of Stormwind remained dominant in the unblemished southern ranges. Now a much smaller region, the Redridge Mountains were eventually conquered by the Orcish Horde in the First War,[1] in which the southern kingdom was forced into exile. The humans eventually returned triumphant and began rebuilding their former holdings. Yet the orcs of the Blackrock and Black Tooth Grin clans would also return, this new "Dark Horde" plaguing the town of Lakeshire from their former stronghold of Blackrock Mountain.

Eventually, the orcs allied with the wicked human warlock Morganth and his Shadowhide gnoll lackeys, and seized the eastern half of Redridge, capturing the human castle of Stonewatch Keep before the events of World of Warcraft.[10] Weakened by political turmoil in Stormwind, Lakeshire was left with little military aid to fend off the encroaching orcs until the return of Reginald Windsor.

The region remains heavily contested. Desperate, the people of Redridge seek help from outside sources, recruiting passing adventurers to help in the defense of Lakeshire and the liberation of Stonewatch.

With the guidance of the dragon Darkblaze, the Dark Horde have also begun invading Redridge sometime after the Cataclysm. An Alliance adventurer deputized by the Stormwind Army travels to Redridge to aid the beleaguered Stormwind guards and reform Bravo Company to combat the threat. During their war with the Blackrock orcs, Render's Valley was blown up but the Dark Horde has been driven back to the Burning Steppes. Stonewatch Keep has also been reclaimed.

Stormwind also increased Redridge's security by constructing Tower Watch on the Three Corners and stationing a garrison of Redridge Watchmen there.

At some point in the past, Greydon Thorne hid three crystal shards from the Diamond Blade that held the essence of a naaru that was a key do the defense of Azeroth against the Darkstorm. Gazlowe, Charnas, and Gimble Sprysprocket transported Makasa Flintwill and her friends to the area on the Cloudkicker. Due to the political situation, while Makasa and her group were in Lakeshire and surrounding areas looking for the crystal shards, the Horde zeppelin and the goblins stayed hidden somewhere in the northern mountains. The first shard was in Lakeshire, in the backyard of the Glades' house, the second one was in a cave northeast of the village that has been guarded by a blue drake named Telagos for several years, and the last one was in a mine shaft of the Lakeshire quarry. Later, Murky also secured the help from the Everstill murlocs, taking them aboard the Cloudkicker to the Blasted Lands.[11] 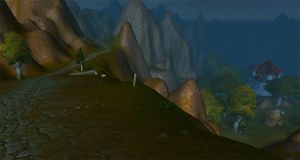 The Redridge Range[12] is a mountain range in the southern sub-continent of Azeroth. It reaches from the Deadwind Pass in the south to what's now called the Searing Gorge in the north. Two hundred years before the opening of the Dark Portal, the northern reaches of the range were obliterated by the summoning of Firelord Ragnaros and the creation of Blackrock Mountain.

Map of Redridge Mountains prior to Cataclysm.

The Redridge Mountains are home to several humans of note, the great bulk of which reside in Lakeshire. At the fallen bridge Marshal Marris sends promising young humans to eradicate the clusters of Shadowhide gnolls and Blackrock orcs who have taken a chokehold on the land. He is assisted in his efforts by Verner Osgood, who also seeks to rid Redridge of the vile Redridge gnolls. And at the Lakeshire Town Hall, the aging Magistrate Solomon recruits adventurers to seek help from Stormwind's other bastions of civilization like Stormwind City, Sentinel Hill, and Darkshire. Stormwind City seems to have abandoned Lakeshire to fend for itself like it did to Darkshire and Sentinel Hill. Both these towns say they cannot help Lakeshire due to their own overwhelming problems. 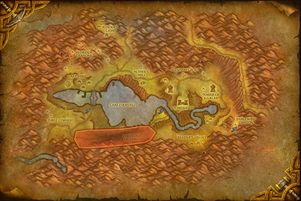 Redridge Mountains has one dig site:

The Redridge Mountains is a lovely area surrounded by some troubled spots, but so far has been untainted by the Burning Legion or the Scourge.[13] The Burning Steppes to the north were formerly part of the Redridge Mountains[14] as well was the area of Lethlor Ravine in the Badlands, which was once beautiful and verdant. Both were transformed after the summoning of Ragnaros destroyed the northern part of the mountains.[15]

Supplying the Alliance with timber, fish and crops, the Redridge Mountains is also a vacation spot for many residents of Stormwind. The tranquil woods, rivers, and lakes make it a sought-after retirement area for veterans with fish to catch and tales to tell. Only a handful of dangers trouble it: the usual monsters of the woods and the small matter of the Alliance keep overtaken by orcs.[13] The Stormwind army maintains a token presence here and handles Redridge's few crime problems. There is no better place in Azeroth to enjoy a pint.

To summarize, Redridge is a haven in the midst of a troubled continent.[16]

Redridge was once a larger stretch of mountains in which the Dark Iron dwarves established a colony in the northern reaches called Thaurisan after their exile from Ironforge. Their mad thane Thaurisan befouled the region when he summoned Ragnaros. Half the mountain range melted into the Burning Steppes, but the rest remained pristine.

These mountains and foothills were used as thoroughfares in the many wars in the past fifty years, but they somehow remained untouched while the surrounding regions suffered. Now it is the last true area wholly under Alliance influence in Azeroth, and it sometimes struggles to remain so.[17][14]

While the ravaged mountains of the Burning Steppes border it on the north and the deadly Swamp of Sorrows and Deadwind Pass border it on the south, the Redridge Mountains more reflects the beautiful Elwynn Forest to the west. Redridge matches Elwynn's climate, being warm and temperate with just the right amount of rain. The higher altitude and closer proximity to the mountains make it a bit cooler than Elwynn, but no less pleasant.[13]

Several elms and pines make up the forests in this region, providing a traveler much needed relief from the sun if he is coming from far away lands, but also giving monsters and orcs good places to hide. Rivers snake through the area, most of them emptying into the massive Lake Everstill.

Although a peaceful Alliance region, the mountains remain dangerous at times, with tarantulas in the east and orcs in the north, and the usual gnolls or wolves prowling the forests.[16]

The Redridge Mountains are depicted close to their World of Warcraft incarnation. Stonewatch Keep is shown falling to the Horde.