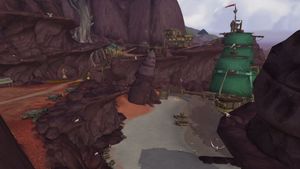 Redrock Harbor, as seen from the north 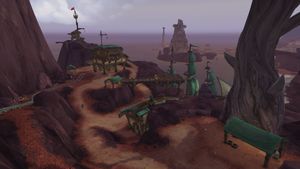 The hovels on the southern cliffs, as seen from the east

Redrock Harbor is a bay near the southwestern edge of Vol'dun, currently occupied by Ashvane Trading Company forces that have arrived to launch an Azerite-mining operation at the nearby Redrock Mines. The ship The Siren's Call is docked in the bay. Pathways lead up the cliffs, with one road splitting off to the northeast (to the Ashvane Encampment and the Redrock Mines) and northwest, while another winds its way up to a series of hovels and small buildings high up on the harbor's southern cliffs.

Found throughout all parts of the harbor:

In a cave on the north side of the beach:

On the northeastern cliffs:

On a platform on the southern cliffs:

On the northern cliffs during