From Wowpedia
(Redirected from Refuge Point)
Jump to: navigation, search 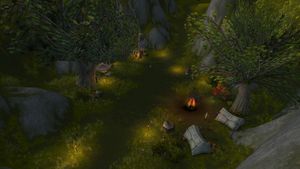 Refuge Pointe before Battle for Azeroth.

The League of Arathor Tabard.

Refuge Pointe is a base of the kingdom of Stromgarde. When the Stromgarde capital was in ruins following the Third War, most of the populace fled south, while the proud remnants of Stromgarde's elite army stayed behind, determined to fight on to reclaim their land. It is from Refuge Pointe that the Alliance's military operations in the area are conducted, most of which is concerned with aiding the Stromgarde army retake their former capital and securing resources for the Alliance in the Arathi Highlands. There is also an Alliance entrance to the Arathi Basin.

It is more of an outpost than a full town since it has only tents and no mailbox. The inn is the southernmost tent.

The League of Arathor