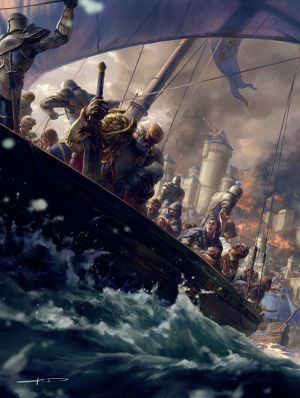 Lothar leading the refugees of Stormwind to Lordaeron.

A refugee is a person who has been forced to leave their home in order to escape one of the many wars, persecutions or natural disasters constantly happening on Azeroth, Outland and alternate Draenor.

The First War transformed the prosperous and idyllic kingdom of Stormwind into a field of smoking ruins. The cities of Grand Hamlet, Moonbrook and Goldshire all got sacked by the Orcish Horde on their path of destruction to Stormwind City, and when King Llane fell sir Anduin Lothar had no other choice than to declare the war lost[1] and save what remained by gathering the tattered remnants of the army and as many civilians as he could to lead them in a desperate retreat across the Great Sea. While battling through the overrun streets to reach the city's harbor many lives were lost, including Queen Taria Wrynn.

Among the refugees were the young Prince Varian Wrynn, heir to the throne of Stormwind, lady Mara Fordragon, the High Clerist that would become the patron of the displaced people of the kingdom, knight Gavinrad and the mage Khadgar.

The orcish hunter called Zigris became infamous for tracking down Stormwind refugees and slaughtering them for sport.

After their tumultuous escape by boats the Stormwind refugees eventually landed on the coast of Lordaeron, near the village of Southshore. Marshal Marcus Redpath greeted them and sent a rider to alert King Terenas of their arrival.[2]

Path of the Damned

The citizens of Lordaeron who survived the loss of their kingdom at the hands of the Scourge and Burning Legion fled for their lives. Some of them tried to enter the nearby kingdom of Gilneas but were stopped by the Greymane Wall, others were personally slaughtered by Arthas.

Others joined Jaina Proudmoore and left for Kalimdor where they would eventually become citizens of Theramore.

The destruction of Draenor years ago displaced a lot of people, Shattrath becoming a haven for those lost souls. A Refugee Caravan encountered troubles while trying to cross the Bone Wastes.

During the events of the war against the Lich King, the Horde helped the Taunka of Westwind Refugee Camp. Not too long after, the battle for the Undercity forced many Forsaken to flee to Orgrimmar for their lives.

The natural disasters of the Cataclysm destroyed several coastal cities, and the people of Gilneas had to seek for refuge in the territories of their kaldorei allies due to the Forsaken invasion. The people of the Hillsbrad Foothills also had to leave their plagued homes, and the people of Auberdine regrouped themselves in a refugee camp just outside the ruins of their city. After the Cataclysm rumors had spread that the draenei withstood the breaking of the world, and as such desperate humans thought that refuge could be found on Azuremyst Isle.[3]

Pandaren of Kun-Lai Summit also became refugees because of the enraged yaungol tribes. They sought refuge in the Vale of Eternal Blossoms.[4]

Some Horde civilians had to leave their capital city because of the civil war and the consequent Siege of Orgrimmar.

Following the Burning of Teldrassil, the night elves and Gilneans became refugees that were evacuated to Stormwind City and Azuremyst Isle.

Horde refugees from the Undercity were teleported out of the city to Orgrimmar,[5] while others were moved from Tirisfal across Lordamere Lake.[6]