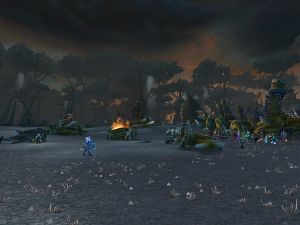 Refugee Caravan is a small neutral makeshift camp in the northern part of the Bone Wastes in Terokkar Forest. It is populated by several refugees of numerous races who are living in Shattrath City. They were going to assault Auchindoun but were attacked by Shadow Council raiders before they arrived. Caravan Defenders and Sha'tar Vindicators protect the refugees and people who are diligently working to repair wagons to get the caravan back to the city. There were a number of children who have been kidnapped and brought to Veil Skith, a Skettis village. Ethan, a small boy, asks passersbyers to rescue his friends. There are also other people with various quests to offer. The vindicators and defenders will also attack anyone who disturbs the peace, Horde or Alliance, as well eliminate any threats from creatures that lurk around.

Other members of the caravan