Rehgar Earthfury (pronounced RAY-gawr")[1] is a shaman and one of Thrall's advisers. Before becoming Thrall's adviser, Rehgar was a successful gladiator slave master who "owned" Varian Wrynn while he was suffering from amnesia.

At Thrall's request, he represented elemental magic in the New Council of Tirisfal. 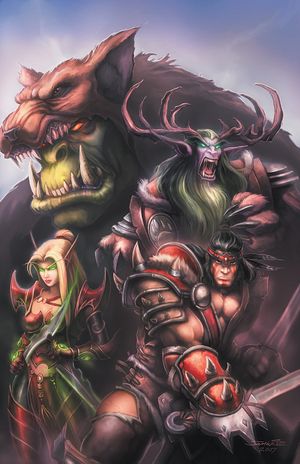 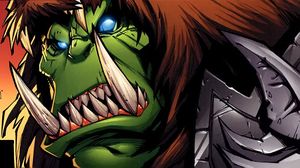 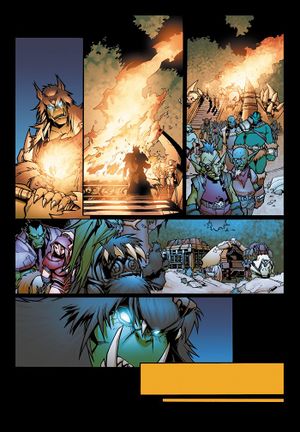 Rehgar Earthfury was born on Draenor into a clan warring with a band of ogres. He made his first kill long before the normal age of an orc's rite of passage, and was captured by the ogres to be used as a training tool for their youths. However, Rehgar grew into a strong warrior, and after slaying many of their young fighters, was sold to the orc arenas in an attempt to recoup their loses.

Despite his young age, he was a superb warrior, and was chosen to participate in the orcs' invasion of Azeroth, leading to his eventual capture and internment. However, unable to subjugate him, the guards sold him as a gladiator to fight for the human, Lord Agrovane. He escaped and became a fighter in underground arenas, gaining riches and fame.

Using his savings, he purchased the Blackrock orc, Bloodeye Redfist, from authorities in Booty Bay, and followed Thrall's teachings, becoming a shaman. After arriving in Durotar, they traveled the fighting circuit, Rehgar teaching Bloodeye the ways of the gladiator. Bloodeye became the orc's favored champion, dominating in single combat, earning both himself and Rehgar riches. Bloodeye bought his freedom, and the two pooled their money to purchase and train Valeera Sanguinar and Broll Bearmantle to join Bloodeye in team combat.

Shortly after, Bloodeye was killed, poisoned by the mate of a fighter he slew in the arena. Following Bloodeye's funeral pyre, Rehgar set out to find a replacement for his team.[2]

Rehgar discovers an amnesiac human on the coast of Durotar, and enslaves (using the excuse he was a Theramore deserter) him as a gladiator. The human had killed a crocolisk in self-defense when Rehgar's group came across him, and so Rehgar jokingly nicknamed the man "Croc-Bait". Rehgar brought his team to Orgrimmar where he taught them to channel their fury and use their assets to fight individually and as a team. The amnesiac human later leads Rehgar's team to victory in a Crimson Ring tournament at Dire Maul, gaining Rehgar a fortune in gambling winnings. After the tournament, Rehgar takes his team to Thunder Bluff in order to find a tauren gladiator to take the place of Valeera Sanguinar, whom he sold to another gladiator master. On the way there, the human (dubbed "Lo'Gosh" by the spectators at Dire Maul, a name which stuck) and his teammate Broll Bearmantle request to visit the haunted Pools of Vision. The two of them hope to discover answers by taking part in a ritual there--Lo'Gosh hopes to fill in the missing pieces of his memory, and Broll hopes to commune with the spirit of his deceased daughter. Rehgar grants their request and visits with his friend, Arch Druid Hamuul Runetotem. After Lo'Gosh and Broll defeat a mysterious elemental monster that has taken up residence in the Pools of Vision, the gladiators are taken to see Hamuul and Rehgar. After conversing for a time, Hamuul gives Lo'Gosh the feather of a hippogryph as a gesture of thanks for destroying the monster. Rehgar knows that Hamuul's purpose in the gift is that it can be used by his gladiators, through Broll's druidic powers, to summon a hippogryph that will carry them to freedom, but says nothing at the time.

Lo'Gosh and Broll took flight on the back of the hippogryph Sharptalon and Rehgar sent his guards to recapture them. However, it appeared as though Rehgar privately hoped his fighters would successfully escape. After Hamuul observes that Rehgar does not appear concerned by the loss of his slaves, Rehgar replies as follows:

"At Dire Maul, I recouped my investment in those two a thousand times over. I knew this day was coming. A man is truly a prisoner only as long as he agrees to remain one. After that, in his heart, at least, he is free. And where his heart is, his body may follow if his will is strong enough."[3]

Following their escape, Rehgar realized that since his "heart was with them instead of the profit he could have made from their service", that he has had his fill of battle and the Crimson Ring. He has thus retired as a gladiatorial master and offering his services to Thrall, has been made the Warchief's trusted advisor. Rehgar and Garrosh Hellscream used to be in disagreement with each other: while Garrosh wanted to destroy the Alliance, who he considers the Horde's enemies, and take Azeroth for their own, Rehgar wanted to remain open to diplomacy with the Alliance and conserve their treaty of non-agression with Theramore. Rehgar later accompanied Thrall and Garrosh to Theramore for a summit with King Varian Wrynn and the Alliance. The summit turned disastrous however, as Twilight's Hammer agents posing as member races of each faction attacked all the delegates; leaving both factions in distrust of one another. Later on, Garrosh, who was angry at losing face at Theramore and Thrall's continuing tolerance and cooperation with the Alliance, began to openly challenge Thrall's leadership when they returned to Orgrimmar. Rehgar advised Thrall to make an example of Garrosh before his warmongering ideas spread. Thrall concurred and lured Garrosh to challenge him to a Mak'gora. Before the duel could be concluded however, the Scourge attacked Orgrimmar and Rehgar was among the many defending Orgrimmar against them.[4]

He later becomes a member of the New Council of Tirisfal in Thrall's stead and helped to defend Theramore several times and ultimately, he aided Med'an in defeating Cho'gall.[5]

Joining to the Earthen Ring, Rehgar traveled to Maelstrom shortly after the Shattering. There he, Nobundo and others shamans tried to help Thrall during his failures. When Thrall returned from his epic journey to Maelstrom, Rehgar was happy to see him and he, alongside Aggra were the first to know that Thrall is now Go'el.[6]

Rehgar learned about the fall of Theramore and was worried about what Garrosh would do next.[7] 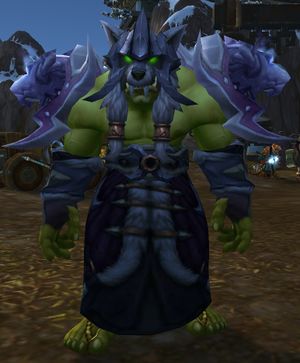 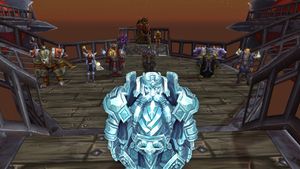 Rehgar with Magni and the other Horde heroes.

Rehgar is one of the few surviving members of the Earthen Ring after the catastrophic battle at the Broken Shore.

[The Fist of Ra-den], which belonged to Ra and was placed in the care of Xuen after his defeat. However, Xuen required that whoever sought to wield the weapons must pass a trial. Rehgar said that since he trained Varian, the adventurer was in good hands. Together, Rehgar and the adventurer brought down Chen (who Rehgar seemed to have a rivalry with) and Li Li, earning them the Fist of Ra. After retrieving the weapon, the Burning Legion attacked the temple and were fought off.[8]

During the conversation with the Tidehunter, Neptulon, Nobundo told him that they must reunite the four Elemental Lords. The Tidehunter discarded the idea as Rehgar insulted him that they would rather be slaves to the Dark Titan as enslaved to another. He participates in the battle in the Elemental Plane of fire to provide the Farseer support to recruit the new Elemental Lord of Fire, Smolderon.[9][10]

After the Elemental Lords are reunited by the Farseer an impressed Rehgar declares that it has been an honor to behold their accomplishments. He then becomes a champion of the Earthen Ring.[11]

When Magni called upon the champions of the Armies of Legionfall to draw the corruption out of the Sword of Sargeras, Rehgar carried the

[Doomhammer] if the player was not a shaman, representing the Earthen Ring.[12]

Pissed
You must think this is one of those games where you have to click around constantly to get me to do stuff. It is not!

"I was born for the arena. On my squad, we trust the spirits for guidance. No one is left behind. Not even a pinkskin. And when our backs are to the wall, I call on the elements to even the odds! The name's Rehgar. 'Heroes of the Storm'? I am the storm!" 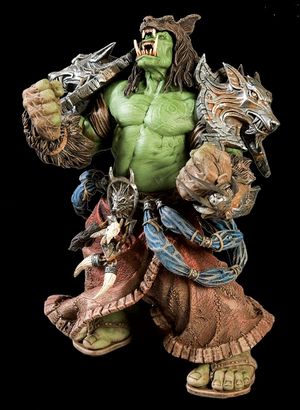