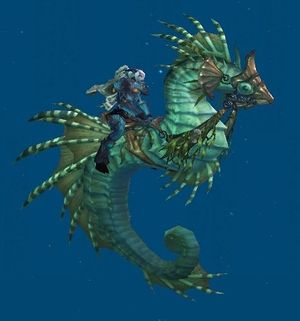 The Reins of Poseidus summons the Subdued Seahorse, an epic seahorse mount that can be used in any aquatic environment (

[Vashj'ir Seahorse] is limited to Vashj'ir). Therefore, although it is slower than the Vashj'ir version, it is widely sought after.

Several factors make this mount desirable to players. The first would be that it is one of two swimming mounts usable anywhere, the other being the

[Sea Turtle], a very rare fishing drop. Therefore if you can kill Poseidus, you are guaranteed a swimming mount rather than fishing day after day. Another is looks; this is one of only two seahorse mounts in the game, which is very attractive to mount collectors.

Being collectable leads into the third factor, which is 'how much gold is it worth to you?' Being BoE, this mount can be sold to other players, and you can usually find one in the auction house from time to time. Players will farm for Poseidus during its spawn times, solely to get the mount to sell (which can include illegal gold farmers: as always, report a suspected gold farmer to the GMs via ticket). This can be an option for players that do not want to farm for either mount and can afford local server prices, which are often very high for this mount.

A fourth, lesser factor would be utility; if you must swim, are not a druid or a class that cannot walk on water, why not have a mount that can make you go faster? In this regard, the Sea Turtle is actually a better choice, as it is amphibious and both mounts swim at the same speed. Being able to walk on land means the Sea Turtle can jump above the surface, while the Reins of Poseidus cannot, automatically dismounting the player.

This item is a guaranteed drop from Poseidus, a rare spawn in Shimmering Expanse and the Abyssal Depths.

"Summons and dismisses a rideable Subdued Seahorse. This mount is a zippy swimmer.

Due to his capricious nature, swim speed is not affected by effects that increase or decrease mount speed."

"One has not truly lived until they have felt the tidal current rushing through their hair while atop a majestic seahorse," said no one. Ever.

A WoW developer known to frequent the Petopia forums was once asked why this mount's speed was limited in Vashj'ir. It was explained that the original goal was for it to have Subdued Abyssal Seahorse speed in Vashj'ir, and Sea Turtle speed outside Vashj'ir.

However, they found that they could not enable both speeds properly. They were forced to choose between either applying only the Subdued Abyssal Seahorse properties, locking it to Vashj'ir, or applying only Sea Turtle properties, which would limit the speed in Vashj'ir, but also allow it to be used everywhere else.