Reins of the Blue Drake 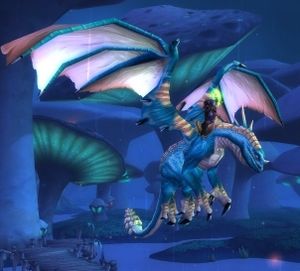 This item has an extremely low (1% - 2%) chance to be found inside Alexstrasza's Gift after defeating Malygos in the 10-player version of The Eye of Eternity.

[Cache of the Ley-Guardian], which can be found in the Cache of Eregos after defeating Eregos in the Oculus on Heroic mode when the dungeon is randomly selected by the Dungeon Finder.

This item also drops from

It also has a chance to be listed on the Black Market Auction House by Mei Francis, for the opening bid of 20,000

Come not between the dragon and his wrath.

This mount no longer drops from Malygos.