Reins of the Grey Riding Camel 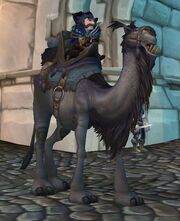 This mount is a guaranteed drop from Dormus the Camel-Hoarder in Steam Pools. However he is phased and can only be seen by those who touch Mysterious Camel Figurine, which can be found anywhere within Uldum. Each figurine will generally turn into dust, but a small percentage will instead port the player to Dormus.

As of patch 4.1, killing Dormus and acquiring the mount awards the Feat of Strength achievement

[Scourer of the Eternal Sands] as well as the title <The Camel-Hoarder>. Titles were awarded retroactively to players who had already had the mount.

Note: The statues are not targetable, and thus searching for them with a /target macro will not work. A player will need to search "by eye."

Fennimore Quigley is credited with milking the first camel and breaking the record for "longest unintentional flight," all in the same afternoon.