Reins of the Long-Forgotten Hippogryph 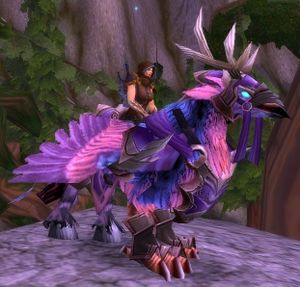 Find and click on five Ephemeral Crystals in Azsuna within eight hours before anyone else, and this mount will be added to your bags. The crystals will respawn approximately 12 hours after the last mount was found, or 12 hours after server resets.

You must not leave Azsuna or server hop while doing this, or your progress will be reset to zero. Dying will also reset your progress. In such cases, you will have to retrace your steps to the crystals you clicked on to click them again and regain your progress.

It is safe to logout, but of course, there is no guarantee that someone else won't get to the other crystals first while you're gone.

Should you be the winner, the Long-Forgotten Hippogryph will spawn hovering in front of you and casts Arcane Cyclone on you (but this doesn't actually do anything).

In the case that your bags are full when you click your fifth crystal, it will be a lost item that Thaumaturge Vashreen will mail to you instead. 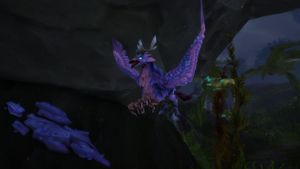 Finding all 5 crystals will spawn a hippogryph.

Once a hippogryph has been found, a zone-wide message will be triggered.

You hear a faint caw in the distance and then silence...

You are the only one that remembered.