Rell Nightwind is an SI:7 operative who commands the team assigned to track down the whereabouts of the White Pawn. He dual-wields a pair of daggers.

He owns a gyrocopter. 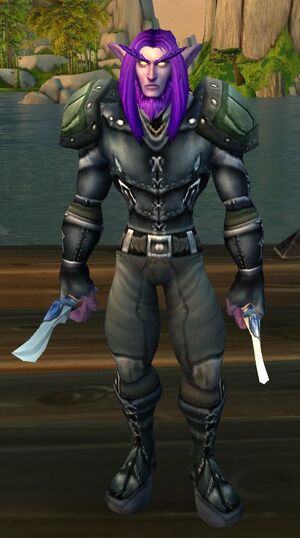 Rell was first seen in Stormwind Keep reporting the status of the Alliance fleet that had Anduin Wrynn on the board to King Wrynn. He alongside other agents of the SI:7 were tasked to travel south and find the White Pawn. Flying on the board of the Skyfire, the army was attacked by Horde ships.

As Alliance champions make a foothold on Pandaria, Alliance adventurers first see a glimpse of the sha during

[86] The Right Tool For The Job, during which Rell is temporarily affected by it. Taran Zhu cleansed him of the sha before it overtook him and explained a little of what the sha is. Taran Zhu warned Rell to be careful of what emotions he's emits in Pandaria. Rell then directs the player to Paw'don Village where he hopes to establish diplomatic ties with the natives and establish a secure location to tend to their wounded.

Further into the Jade Forest, he found Ga'trul and orders Alliance adventurers to take him out. During the fight, they bore witness to how the orc succumbed to the sha. Taran Zhu and Rell arrive shortly after the battle and explained in thorough detail about the sha and how they thrive on negative emotions. Rell stated that the Horde would seek to conquer Pandaria and urged the pandaren to join them in their quest to repel them. Taran Zhu declines, wishing to remain out of their war. Taran Zhu states that the war will have drastic ramifications in Pandaria and warns them to not bring their war to these shores.

Accompanied by Mishka and Sully, the trio followed Admiral Taylor to Pearlfin Village. He began working to befriend Pearlfin Jinyu and when Taylor was recovered, he was sent out into the wilderness with Sully and Little Lu to find Anduin.

He found a plane and Agent Amber Kearnen in it. His team defended her from the attacking Forest Hozen. After this, his team set up a camp near Serpent's Spine and everyone went to scout or prepare a camp. He was critically injured in a one-sided battle against superior numbers of Horde-aligned hozen in

[86] SI:7 Report: Fire From the Sky. He survived though and the team continued to the north - to the Lair of the Jade Witch and near the Grookin Hill. Subsequently they returned to Pearlfin Village. It is unknown if immediate first aid could have helped him, but by the time his team brought him back to Pearlfin Village, Mishka explained that he was dying; he did not have much time left and all she could do was to make him more comfortable, while Amber Kearnen expressed frustration with their helplessness.

Apparently recovered, he is seen in Celestial Tournament along with his comrades.

He was not seen since

[86] Get Back Here!, the other agents making no further mention of him and focusing on their duties. In Kun-Lai Summit, Admiral Taylor tells adventurers that "we lost some good people"[2] without mentioning any specific names. Though he was presumed deceased,[3] it was later revealed by Dave Kosak that Rell actually survived the war. When patch 6.0 went live Rell and his team were re-added into the Celestial Tournament and it was not done so when the Timeless Isle was current in 5.4.

Sometimes these goons make it too easy.

What came over me?

We need to do right by these people if we want a chance at understanding this land.