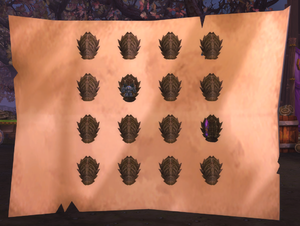 When the game is launched, four by four shells, allowing for 8 pairs, appear on a piece of parchment. The shells hide objects that must be matched with their identical counterparts. The shells can be turned two at a time.

There is no progression.

Flip the shells. Remember where they are, and match the pairs!