Keeper Remulos is a level 72 elite quest giver located at the Shrine of Remulos in the contested territory of Moonglade. He is one of the younger sons of Cenarius, and a Keeper of the Grove. Remulos is a keeper of great strength and wisdom. In the absence of his father and Malfurion Stormrage, Remulos served as leader of Moonglade's branch of the Cenarion Circle in the years prior to the Cataclysm.[citation needed]  He led the battle against the corrupted Eranikus and participated in the War Against the Nightmare.

Remulos is described as being immortal.[3]

The Sons of Cenarius

Remulos was born the son of Cenarius and brother of Zaetar. Remulos was strong and beautiful, while Zaetar was very cunning and slight of build. While both were respected equally, Zaetar never felt as if he could compare to the glory and attention he thought Remulos had, and when Remulos' own children—Celebras and his dryad sisters—were born, a jealous Zaetar set out to outdo his brother. When Zaetar fell in love with Princess Theradras, Remulos knew that their union was cursed and tried to stop his brother, but Zaetar refused to listen.[4]

Remulos crafted a druidic idol given to Broll Bearmantle which was corrupted by the pit lord Azgalor in the Battle for Mount Hyjal. The corrupted idol seemed to be a big source of corruption and had noticeable influence in the Third War, although it was finally cleansed by Broll himself and put to custody by Archdruid Fandral Staghelm in Darnassus.[5] 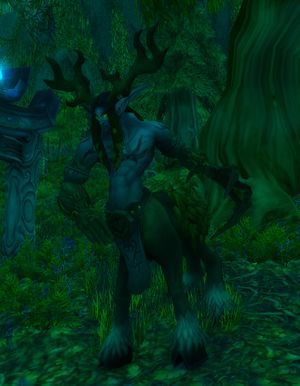 Like Cenarius, he has produced many children, including Celebras, Cavindra and several other dryads. He resembles his father, having the lower body of a stag, the upper body of a night elf sporting antlers, and a long wooden talon for one hand. Remulos maintains the Moonglade, the sacred center of all druidic studies. He is also an important member of the Cenarion Circle, but has found himself increasingly in conflict with the night elf Archdruid Fandral Staghelm. Against Staghelm's wishes, Remulos welcomed the tauren into the Cenarion Circle and taught them many closely guarded secrets. Remulos also vehemently opposed the creation of a new World Tree, seeing it as nothing more than a selfish gesture by the night elves eager to reclaim their immortality. As such, tensions between the two remained.[1]

After the spirit of Zaetar was freed, Remulos learned it from the adventurers that Zaetar sent to him. Remulos was relieved to learn that.

During the events of the opening of Ahn'Qiraj, Keeper Remulos opened a portal into the heart of the Dream over Lake Elune'ara, from which Eranikus emerged. Eranikus, still under the control of the Old Gods, demanded the body of Malfurion Stormrage. The mortal champions and allies were asked to defend Keeper Remulos from dozens of Nightmare Phantasms, that had accompanied the fallen green to the mortal plane, until the arrival of High Priestess Tyrande Whisperwind. As the phantasms were defeated, Eranikus landed himself and attacked the son of Cenarius. Eventually, Tyrande arrived with a half-dozen Priestesses of the Moon. Together they channel the powers of Elune in a prayer to redeem the cursed dragon.

During the war against the Lich King, adventurers approached Remulos by the advent while saving Crusader Bridenbrad. Remulos granted them entry into the Emerald Dream.

At the beginning of the War Against the Nightmare, Tyrande, Fandral and many other druids came into Moonglade, and Remulos asked Fandral whether the Idol of Remulos has not been used and Fandral responded that not, though it was a lie. At the moment when Ysera was taken by the Nightmare, Remulos mysteriously vanished. He was in the heart of the Nightmare, where he learned the fate of Tyrande, Broxigar's axe, and that the Nightmare Lord is Xavius. Corrupted, he returned to Darnassus and told everything to Malfurion. Eventually, they together ventured into the Nightmare and he turned on Malfurion, because Xavius used him as a pawn to lure Malfurion into a trap. He was eventually defeated and was cleansed of his corruption.

After the War was over, he was one of many who witnessed the marriage of Tyrande and Malfurion.[6]

Some time later, Remulos refused to bless a meeting of Hamuul Runetotem and Elerethe Renferal so the meeting had to take place in Ashenvale. However, he was willing to allow a second meeting in Moonglade if the first one went well.[7]

After the defeat of Archimonde on the alternate Draenor, Malfurion learned about a new pact between the Nightmare and the Burning Legion. As Malfurion rushed to Val'sharah, Remulos thanked the adventurer and gifted them with a Grove Warden.[8] 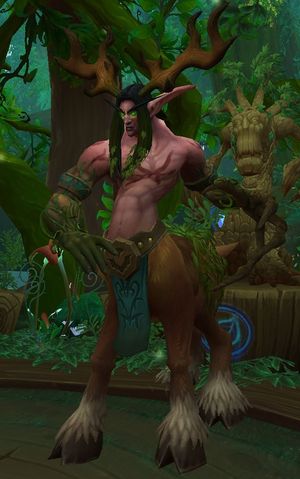 The Cenarion Circle planned to move the bulk of its forces to the Dreamgrove in Val'sharah, the ancient forest where Cenarius taught Malfurion, in order to combat the return of the Burning Legion. Hamuul Runetotem, Malfurion, Naralex, Zen'tabra, Remulos, and a druid hero opened a portal to the Emerald Dream at the Stormrage Barrow Dens, allowing their forces to move swiftly over vast distances. Remulos then led the brief battle against the Nightmare in that section of the Dream, pushing it back.

In Val'sharah, Remulos was held captive by rabid wildkin before being freed by an adventurer and Guviena Bladesong.[9]

At Nordrassil on Mount Hyjal, Remulos and the druids call upon Malorne. The white stag reveals that his mind has grown clouded. When he sensed the corruption of Shaladrassil, Malorne ventured into the Emerald Dream to destroy the Nightmare's source. But when he reached the Rift of Aln, he saw the Nightmare's true strength, that it will fester and grow like a disease until it engulfs all of Azeroth.[10] With Malorne trapped and no longer able to see the way back into the Dream, Remulos resolves to open the sealed portal to the Rift of Aln at the Emerald Dreamway and save his grandfather.[11]

Within the Emerald Nightmare, Malorne has become trapped in a recreation of his darkest nightmare: his death at the hands of Archimonde in the War of the Ancients.[12] The druids enter the Nightmare and help the Wild Gods to fight off the demons, culminating in aiding Malorne against a figment of Archimonde himself. After being freed from the Nightmare, Malorne travels to the Dreamgrove and grants the grove's Archdruid his blessing and the duty of using Malorne's power to serve and protect the wilds.[13] Afterward, Remulos pledges himself to the Archdruid of the Dreamgrove to serve and protect the wilds.[14]

While on an Island expedition to the Verdant Wilds, an adventurer clashed with several Keepers of the Grove and other unusually aggressive children of Cenarius while searching for Azerite. Bringing a

[Strangling Root] to Remulos, he shared that some keepers of the grove were more fanatic about maintaining the balance of nature than others, attacking mortals on sight due to seeing them as a threat to nature. Remulos apologized that he did not have the influence to keep them from acting aggressively and gave the adventurer some Azerite his fawns found for their time.[15]

Pissed
Don't let the doe hit you in the hind on the way out.

Remulos was Malfurion's chief advisor and, a thousand years ago, he helped forge the Cenarion Circle by teaching men to become druids. Perhaps the most powerful druid in the world, the other members of the group hold Remulos in great reverence.[18]