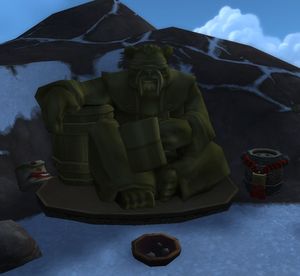 The statue of Ren Yun the Blind at Neverest Pinnacle

atop Neverest Pinnacle in northwest Kun-Lai Summit. Interacting with the statue is one of the objectives of the Pandaria exploration achievement

Father of the individual sensory beers and the Four Senses Brew.

Ren Yun, his other senses heightened by his blindness, suffered for years with what he considered to be the harsh taste of normal pandaren brews. After years of wandering and experimentation he developed separate brews that delighted each of his four senses but, though he had perfected each of these individual beers, the combination of the separate elements into one perfect unifying brew eluded him. For a lifetime more he wandered on until he found at least the secret to bind all of his sensory beers into one master recipe, the Four Senses Brew.