From Wowpedia
(Redirected from Renault)
Jump to: navigation, search

Scarlet Commander Renault Mograine was the young commander of the military forces of the Scarlet Crusade at Scarlet Monastery. Before he was removed from the game in patch 5.0.4, he was a level 40 elite paladin boss located in the Crusader's Chapel of the Cathedral in the Scarlet Monastery. 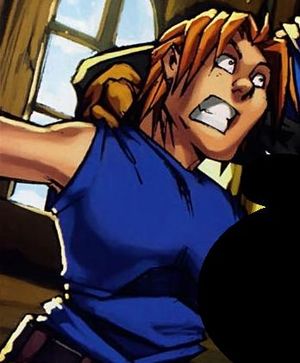 Young Renault in the Ashbringer comic

Renault Mograine was the older son of Highlord Alexandros Mograine — also known as the Ashbringer because of the sword he wielded against the undead. When the first hint of the plague of undeath started to spread around Lordaeron, he lived in a farmhouse in Brill with his father and brother (his mother, Elena died due to post-partum complications when his younger brother, Darion, was born). He joined the Silver Hand at a relatively young age (believed to be about fifteen) soon after the end of the Third War.

The Grand Crusader Saidan Dathrohan (the mortal form of the Dreadlord Balnazzar) had struck a deal with Kel'Thuzad (the lich who served as the Scourge overlord in the Plaguelands) to kill Alexandros; Dathrohan/Balnazzar would be in a position to take over the Crusade and Kel'Thuzad would be rid of a great threat to his hold in Lordaeron. To that end, Dathrohan recruited young Renault by promising him great power and prestige in his Crusade if he could kill his father.

Under the pretext that Darion had been kidnapped by the undead, Renault sent Mograine and his adviser Fairbanks to near the ruined city of Stratholme — the primary fortress of the Scourge in Lordaeron — where they were to be ambushed. Fairbanks fell relatively early on, but Mograine was able to destroy wave after wave of the Scourge attackers. Mograine weakened during the long battle, however, and dropped his sword to the ground; this was the opportunity Renault had waited for. Coming from behind his father, the boy picked up Ashbringer and ran it through Mograine's heart, killing the Highlord and fouling the blade... thus dooming both to the service of Kel'Thuzad.

As promised, Renault was promoted to Scarlet Commander and sent to the Monastery in Tirisfal as commander of operations. His treachery would not be forgotten, though, by the now-death knight Highlord Mograine. His brother Darion and a small contingent from the Argent Dawn entered into the necropolis Naxxramas and destroyed the corrupted Highlord, unaware that the elder Mograine's spirit still resided in his weapon. Darion took the fouled blade and traveled to the Scarlet Monastery to see Renault. Renault flew into a rage upon seeing the blade in his brother's hands and began beating Darion. However, Highlord Mograine was to have his revenge...

Chained to the blade, Alexandros's corrupted spirit appeared in the chapel and confronted his horrified son for his treachery. Alexandros then lashed out, killing the Scarlet Commander instantly. Thus, as had happened in the reverse five years earlier, Renault Mograine was killed by his own father, an act of revenge that would not be forgotten by any who witnessed it that day. 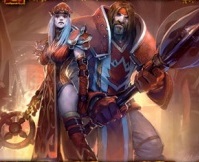 Raleigh the Devout in the Hillsbrad Foothills instructs Alliance players to kill Mograine as part of In the Name of the Light, while Bragor Bloodfist in the Undercity instructs Horde players to kill him to fulfill Into The Scarlet Monastery. However, these attempts to end the Commander's life seem to have failed, as he is in the end slain by his own father's spirit as part of the Corrupted Ashbringer event.

While Mograine is officially dead, it is worth noting that in Mists of Pandaria, High Inquisitor Whitemane dying words were of him. Whether this means anything it's unknown.

The subject of this section was removed from World of Warcraft in patch 5.0.4. 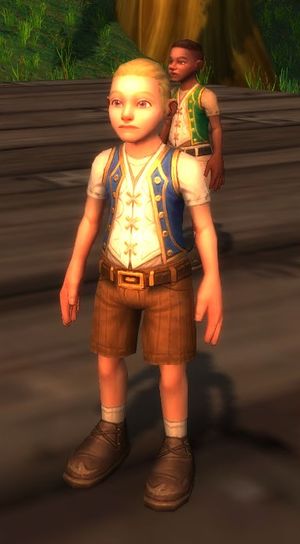 Renault Mograine as a child in Old Hillsbrad Foothills.

Renault Mograine can be found as a young boy in Southshore in the Old Hillsbrad Foothills, accessible via the Caverns of Time.

"Can you not see it, brothers and sisters? There is but one way to wipe the Scourge from the face of Azeroth. The Scarlet Crusade offers you the protection that you so desperately desire, and if you will pledge yourself to us, surely we will reach our ultimate goal. Defy us, and you will be dispatched in a blaze of golden light unlike any you have ever witnessed. My father, known to many as the Ashbringer, one of the most powerful paladins ever to walk the path of the Light, fell to my hand. What hopes could you possibly have, if even he could not stand against us?"[2]