Innkeeper Renee Lauer is a Forsaken innkeeper and general goods vendor located inside an inn in Brill in Tirisfal Glades.

Before the Cataclysm, she was located inside Gallows' End Tavern. 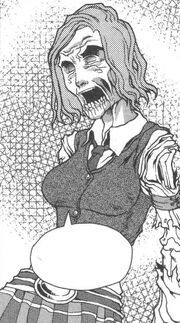 In life, Renee was once an experienced captain in the Scarlet Crusade, and a competent warrior. Her martial skill was such that she was able to instruct others. She quite happily used violence and murder against non-humans. During a raid, she killed the blood elf Rinn Firecaster and the forsaken Jillian Grell. Her nephew Stefan questioned his aunt's and the Crusade's motives. Eventually, their deaths set a series of events in motion, resulting in the arrival of Barnabas Grell and Reynah Firecaster to the glades, who wanted revenge on her for killing their relatives. Around that time Renee was practicing with Stefan who once again questioned the Crusade's mission. Renee became enraged and overpowered him, but stopped her sword right beside his neck. Her angry expression became a smile and she assured him that their cause is righteous. Moments later, Barnabas and Reynah found her camp and captured Renee. As the two were arguing who will deliver the final blow to her, Stefan and some other members of the crusade paralyzed the blood elf and the forsaken, freed Renee and took the two back to Scarlet camp. Renee eventually learned from them that they came here to avenge the death of their family - Rinn and Jillian. When the two asked why she killed them, she responded that it was the right thing to do as this land belongs to humans. Though they tried to attack the Crusade, The Crusaders managed to kill them, but moments later the forsaken led by Sylvanas Windrunner and Varimathras arrived, slaughtering them all, including Stefan, and raising Renee as one of the undead.

However, in death, she employs none of these skills and instead became an innkeeper, a profession that cares for others and provides shelter and sustenance to those that need it. This is in line with her stance that the senseless violence and extremes of the Scarlet Crusade only causes more violence, destruction and death. This caused her own demise, and she spends time trying to convince other Scarlet Crusaders to turn away from the organization. She has tried many times to do so, and while she expects that she will have to keep trying, she is determined to share her story for as long as it takes.[1]

Renee could have likely become a commander in the Forsaken military if she wished. But having rejected the violence and death-dealing of the warrior, she chose to deal out life and comfort as an innkeeper.

She retold her story to a Captured Mountaineer and a Captured Scarlet Zealot. After she was done, she told the zealot that she will get him some fresh pumpkin and left.

Rest your weary bones for a spell.

What can I do at an inn.

When you stay at an inn, you rest very comfortably. Because of this, you will become "well rested" much more quickly than you would in the wilderness. When you are well rested, you learn more from experience.
You may also speak with any innkeeper to get a hearthstone, and can later use the hearthstone in order to quickly return to that inn.