"The Repository" redirects here. For the subzone in Karazhan, see Repository (Karazhan). 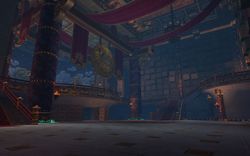 The Repository is a vast mogu library within the Mogu'shan Vaults. It's here knowledge of the past mogu emperors are kept and where The Spirit Kings encounter takes place.

After they are defeated, a secret entrance opens up to reveal a titan facility.

As Lorewalker Cho reads the records of the kings of the past, mogu spirits come active and attack.