For the comic, see Revelations (comic). For the talent, see 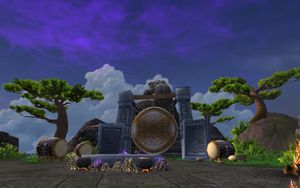 Speak with the Zandalari Prisoner.

The prisoner is being kept upstairs, <name>. It will be difficult to get information from him, but even the slightest detail about their location will help.

The elders have begun questioning him already. With their help we should be able to figure out our next move.

Go speak with him and see if he has any useful information.

What did the prisoner have to say?

We cannot dwell on this setback, <name>. Prophet Khar'zul must be dealt with.

Every member of the Thunder King's forces we are able to destroy brings us one step closer to victory.

Head upstairs and speak with the Zandalari Prisoner:

You are too late! The Thunder King will rise and take dis land from you.

Where have the Thunder King's Remains been taken?!

Jump back downstairs and talk to Cho.

This completes the "Zouchin Village" portion of