Revil Kost is a human priest of the Holy Light. His family was slaughtered by the worgen, and Revil held on to an old doll as a memento for a time. He believes the Light guides his life and is extremely devout in his faith but is not as sympathetic as other priests and has a surly demeanor: for example, refusing to heal a soldier who got stabbed in an argument over food in order to teach him a moral lesson and also chiding him for his selfishness. Many have claimed him to be the angriest priest they've ever met.[1]

Revil was assigned by Archbishop Benedictus to retrieve an artifact stolen by the Dark Riders, last seen in Westfall. His chest was scarred with three horizontal claw marks and he appears to be concerned about Duskwood. He has a small shrine in his home, where he places a torn ragdoll and prays for strength while vowing to take revenge against an unspecified foe,[2] though most likely alluding to the worgen who slaughtered his family.

His search for the Cloak of Purity led him to Westfall where he upset several members of the Westfall Militia after taking their kitchen, and met a mage named Karlain who was also looking for a missing artifact. Karlain warned him that the Dark Riders were acquiring artifacts and proposed that they join forces as their missing artifacts may be targeted by the same group. Revil followed Karlain to meet with his contact Tannos but they were attacked by the Defias Brotherhood. Tannos' use of the Hand of Azora in the battle lured the Dark Riders to them. The Dark Riders killed Tannos and stole his artifact. Revil took a horse and followed the Dark Riders in pursuit.

Karlain would later meet up with Revil again in Duskwood where Revil has been aiding the Night Watch in investigating the Wolf Cult. Revil and a pious man named Ambrose aided Karlain in searching for his son. Revil had his personal motives for doing so however, as the same Wolf Cult who abducted Mardigan was the same worgen who murdered his family. The party of three tracked Mardigan and the Wolf Cult to Roland's Doom where they witnessed Mardigan being made into a worgen. This caused Karlain to attack the worgen cult and his companions joined in the fray. The party was able to slay the vile beasts and with Karlain's help, Revil was able to exact vengeance on the worgen leader Gervase. Their victory came at a cost however as Ambrose was killed in the foray and it was too late to prevent Mardigan from transforming into a worgen. Revil placed a doll by the corpse of his hated enemy and took the Scythe of Elune. Though he accomplished his quest for revenge he still felt unsatisfied. In an inn he encountered Brink, a gnome rogue who told him the origins of the Dark Riders. He offered him a new quest to satisfy his desire for purpose: aid him in reclaiming stolen artifacts from the Dark Riders.

Revil reunited with Karlain and his son and used them as bait to lure the Black Rirders into his ambush. When the Dark Riders attacked them, Revil called on the Night Watch Militia and Brink, the rogue gnome, to bolster their party. When the battle turned unfavorable for the Dark Riders, one of the Dark Riders teleported the whole party to Karazhan. Revil Kost wandered off and found the Cloak of Purity, the very thing he needed to ward off the tower's fel magic. He returned to aid his companions in fending off the Dark Riders. With the Cloak of Purity he was able to see the terrified human face of a Dark Rider and the location of the hoarded stolen artifacts. Both him and Brink tracked the artifacts into a hidden trophy room but it was being guarded by The Curator. The Night Watch and Revil engaged the creature while Brink used a magical amulet to send the Night Watch, The Curator, and the Dark Riders two hours in the past where the events that led them to battle one another never occurred. The gnome and the priest regrouped with Karlain and Mardigan but a false vision had caused Mardigan to become feral and hostile. Revil placed the Cloak of Purity on Mardigan and showed Mardigan the truth about how his mother died, thus calming him down and restoring the family bond between father and son. With the danger passed and their family bond restored, Karlain teleported the party out of the tower. Karlain stated his intention to search for a cure for his son which will require more investigation on the Wolf Cult. Seeing as Revil looked like a man in need of a purpose, the family invites him to journey with them on their quest. Brink, who had acquired their stolen artifacts, gave Karlain back the Hand of Azora, an artifact to Revil, and the Scythe of Elune to an unknown night elf.[1] 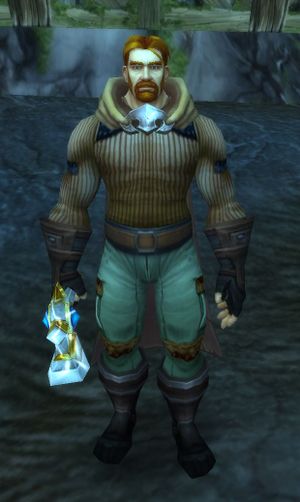 Revil in World of Warcraft.

Since his last adventure in Duskwood, Revil has been tracking the Dark Riders. After the Riders steal their long-coveted Scythe of Elune from Valorn Stillbough and Belysra Starbreeze, Revil is met by several adventurers -a druid, a death knight, and a warlock- at Manor Mistmantle. He helps them recover the Scythe of Elune,

[Ulthalesh, the Deadwind Harvester] from the Riders' clutches as long as he is allowed to take the rest of the relics so they can be given back to their rightful owners. Beneath Karazhan, Ariden was defeated and the artifacts retrieved.

Revil can also be found in the Purple Parlor of Dalaran. He is likely there to visit Karlain, as Mardigan is nearby.