For the tablet, see Rezan (object). 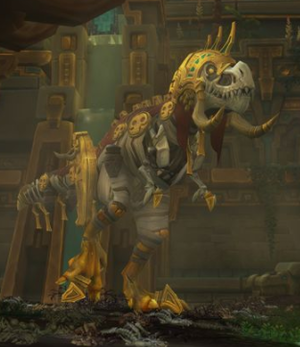 Rezan was a devilsaur loa revered by the Zandalari trolls, and the personal loa of the Kings. Throughout the ages, many kings have ruled over the Zandalari Empire. Each one, however, knew their place when it came to the great loa and offered their praise to the mightiest of all of them, Rezan. He honored deeds over words, but took slights very seriously and was known to harbor grudges.[5] Rezan was ultimately killed by the Prophet Zul, and his corpse was raised into undeath. In this form he is a boss in the Atal'Dazar dungeon, at the Sacrifical Pits.

Rezan, once a loa to the Zuldazar kings and queens, had his soul torn from his body during a ritual. Now, only a twisted husk remains, bent on devouring anyone who enters his hunting grounds.

Known as the Loa of kings, Rezan was the symbol of leadership and strength for the Zandalari peoples since the earliest days of the empire.[6]

While escaping from Stormwind, Rezan lent his strength to Talanji so that she and her allies could escape from the Alliance capital.[7] As Talanji, Zul, and the Horde headed towards Zandalar, Talanji called on Rezan for guidance as she felt that her father might not agree with partnering with the Horde. In response, Rezan declared she was bold and powerful and used his powers to send her to Zuldazar before the advancing Alliance ships could overtake her.[8] 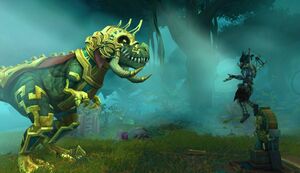 Rezan is first encountered when his follower, King Rastakhan, was near death after being betrayed by Zul. Despite all of his healers' attempts, Rastakhan was unable to be revived because his soul was in the grip of Bwonsamdi, loa of death. To get Rastakhan back, the Zandalari appealed to Rezan to confront Bwonsamdi and claim back Rastakhan's soul. He was successful, with the caveat that Bwonsamdi would be seeing him again in time.[9]

At Rezan's temple, Zul's followers sought to drain Rezan of his power in the same way the Drakkari once did to their loa. Rastakhan and an adventurer slew Vilnak'dor, the troll performing the ritual, and once he was freed Rezan unleashed his fury upon the Atal'zul and their Kao-Tien allies. Afterward, Rezan convinced Rastakhan to realize he had grown soft and Rastakhan swore to take Zul's head.[10]

When the time came to hunt Zul, Rezan was among the army that Rastakhan gathered and led the charge into Atal'Dazar atop Mount Mugamba. However, during the confrontation with Zul, Rezan was slain. Without his power keeping Bwonsamdi at bay, Rastakhan began aging fast.[11] Rezan's essence was used by Zul to revive Dazar, the first king of the Zandalari,[6] and his undead corpse would walk the lower levels of Atal'Dazar.

Zeb'ahari
You speak to the loa of kings, god of the hunt.
What do you want, small one?

Rezan is de one
With de glory of de sun.
He stands strong, he stands tall,
He's de greatest of dem all!


He is mighty! He is bold!
As de legends surely told.
Strong of will and true of deed,
Rezan can always have de lead.


Kingly, sharp, and honor bound.
A more noble loa will not be found.
He is de sun, de morning star.
He is de pride of Zandalar.[12]