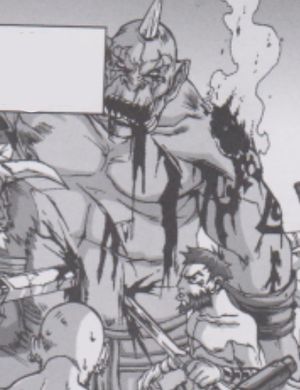 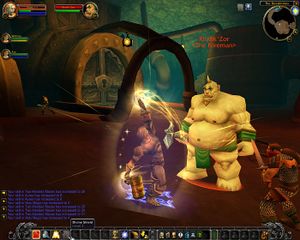 Rhahk'Zor was a level 19 elite ogre in the Deadmines. Rhahk'zor was the foreman in charge of Edwin VanCleef's construction projects.

When Jerias Bloodvein invaded the Deadmines, his pirates killed Rhahk'Zor.[1]

Rhahk'Zor provided a fairly straightforward fight and had the most health out of all bosses except for Edwin VanCleef, who his health was roughly tied with. The only "trick" to this fight was the pull. Players could wait until he walked farther away from the two Defias mobs, and then pull. Of course, with any decent group, these mobs didn't present any sort of difficulty and so could be pulled with the big ogre. Rhahk'zor could not be slowed by mages' frost spells.

In Warcraft: Orcs & Humans, the Deadmines were invaded by ogres and were slaughtered by Blackhand's army; Rhahk'Zor could have been a survivor of the massacre perpetrated by the orcs in order to punish them for plotting with Griselda. However, this event happened during the First War, and Rhahk'zor belonging to this band of ogres is pure speculation.