Rhan'ka is the seemingly insane proprietor of the Goldtusk Inn in Whistlebloom Oasis in Vol'dun, as well a member of the Goldtusk Gang. Norah calls him "odd",[1] and Rikati describes him as "crazier than a bag of ranishu".[2] 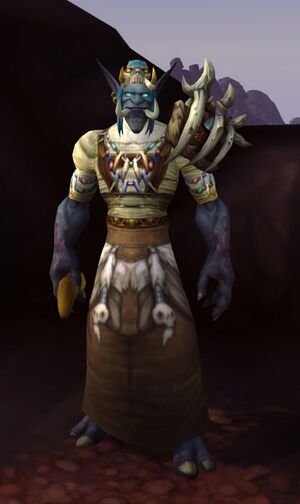 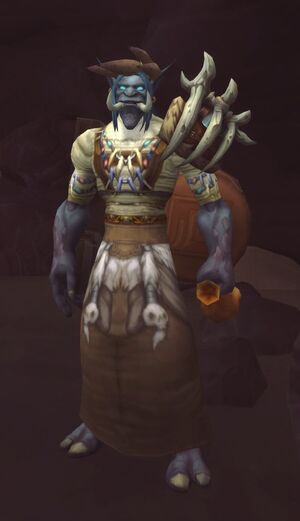 When Norah's vulpera caravan passed through the Whistlebloom Oasis, Rhan'ka paid her upfront to bring him a pineapple for some reason.[3] When the adventurer first meets Rhan'ka at the inn, he appears to be talking to imaginary friends in the form of a group of inanimate Zandalari skulls (Grenja, Man'zul, and Volni). After introducing the adventurer to the Goldtusk Gang,[4] Rhan'ka sends them to gather scorpid blood in Dead Man's Pass so he can make his "famous scorpid blood drinks"[5] and also asks them to look for Zulsan, a lost member of the gang.[6]

However, while the adventurer is away, Sandfury trolls led by Gozda'kun the Slaver attack the inn and kidnap the members of the Goldtusk Gang. Rhan'ka flees with only a banana in hand (as it seemed important at the time) and meets up with the adventurer at the pass.[6] Holding onto the gathered scorpid blood,[5] Rhan'ka asks the adventurer to save the other Goldtusks from the Sandfury hideout,[2] kill Gozda'kun,[7] and get some "honey" from Rhan'ka's friend Rikati.[8] Rhan'ka then rides back to the inn with Zulsan, telling Rikati to hide his honey from the Sandfury hooligans along the way.[2]

When the hero returns to the inn, they find Rhan'ka cowering inside a cauldron with a banana bunch on his head. In return for their efforts, Rhan'ka and his companions decide to allow the adventurer into their gang and let them "see what we see". When the adventurer drinks a ritual cup of boiled scorpid blood spiked with Rikati's wasp honey, it is revealed that Rhan'ka's Goldtusk Gang are not merely skulls but actually troll ghosts that the adventurer was simply unable to see before.[9] After the hero helps the gang out with various tasks, the inn receives its first guest in the form of the adventurer's old companion Bladeguard Tarkaj. After the hero helps Tarkaj recover from his injuries, the Goldtusk Inn officially becomes open for business, and Rhan'ka begins offering his services as an innkeeper. He tells the hero that as a lifetime member of the gang, they will always be welcome at the inn.[10] Afterward, Rhan'ka sends the adventurer to begin advertising the Goldtusk Inn across Vol'dun, starting with the vulpera scavengers at the Court of Zak'rajan.[11]

On first approach in Goldtusk Inn
No, Grenja, I won't buy ya a golden drum! Stop askin' or I be takin' away ya fancy new hat!
Everyone be quiet! We have a guest.

After returning to the Goldtusk Inn
You made it back?
I mean, you made it back!
Before ya footsteps scared me, I was cleanin' de inn with Zulsan just like I said I would... can you tell?