At some point, Toby "Mother Goose" Ironbolt captured a rhino on the Borean Tundra. The shaggy beast carries an enormous grudge after being bridled by a gnome.[3] 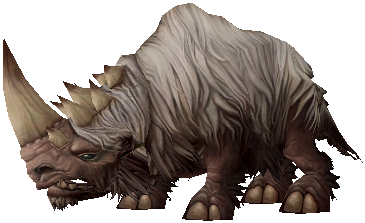 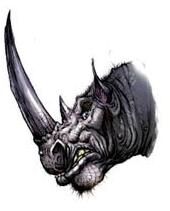 Concept art of a rhino by Samwise Didier.

[Wooly White Rhino] is obtained from a rare loot card in the WoW TCG set Icecrown.

The rhinoceros, or rhino, is infamous for its bad temper and willingness to charge intruders. They are about 6 to 14 feet long, 3 to 6 feet high at the shoulder, and can weigh up to 6,000 pounds.[4]

When it is harassed or annoyed, a rhinoceros lowers its head and charges.[5] Some druids choose them as their animal companion.[6] They can be summoned by druids as nature's allies.[7]