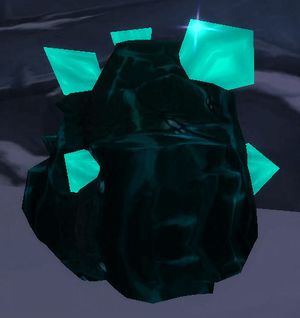 “By the Goddess. It's as if Nature can't touch it!”

Saronite is a metal found in Northrend. It is the blood of Yogg-Saron.[1][2] According to Daggle Bombstrider, it's a very popular item on the black market.[3]

Saronite is an element associated with the Old God Yogg-Saron. It first appeared across Azeroth around the year -4,500 in areas in Ashenvale, Crystalsong Forest, Feralas, Duskwood, and the Hinterlands but was eradicated with the help of Fandral Staghelm.[4] According to the Archivum Console in Ulduar, a powerful acid found within Yogg-Saron is believed to be responsible for the liquefaction of saronite.

Borus Ironbender, the Horde Grand Master Blacksmith trainer in Agmar's Hammer in the Dragonblight, remarks — from his observations of Angrathar the Wrathgate — that he had never seen a metal "breathe" before, and that the only people who seemed to know what this metal was were the tuskarr. They called it the "Black Blood of Yogg-Saron", and in a quest of the same name (

[72] Black Blood of Yogg-Saron), Borus sends players to the Pit of Narjun outside Azjol-Nerub to collect samples of this metal.

[76] Pure Evil shows how strong and resistant the evil metal is. The saronite ore collected was completely unscratched by the attacks from Crusade Commander Korfax's

[Arcanite Reaper]. The ore was also completely resistant to the nature magic used against it by Rayne and Rimblat Earthshatter. Finally, the ore was struck by the powers of the Holy Light by Avenger Metz, and the ore reacted but seemed to reflect the spell back at everyone in the area. The metal itself is very strong while being 1/4 the weight of steel.

This would seem to be the main reason the Lich King chose to use this evil ore to create his fortresses in Icecrown as well as create his war machines, allowing them to be resistant to whatever attack was launched against them. It is possible that since the Lich King is so powerful, and his undead minions have no will of their own to speak of, they might be resistant to the evil of Yogg-Saron.

It also has powerful properties that are useful against undead, whose animate flesh is nigh-indestructible. Sylvanas Windrunner used saronite to end her unlife, reasoning; "The fall alone couldn't kill her: her animate flesh was nigh indestructible. But the spikes, the hardened blood of an Old God, they not only would tear the body apart but would obliterate the soul as well." Properties that could be forged into a weapon. As such, Sylvanas threw herself off from the Frozen Throne, believing that saronite would grant her rest.[5]

However, saronite isn't indestructible; as seen (and explained) in the quest

[80] The Iron Colossus, a Colossus constructed from a saronite alloy is still vulnerable to the acid of the massive Jormungar. Smelted saronite has also been described as being "brittle" on two separate occasions, first in the quest

[80] I'm Smelting... Smelting! where the Scourge used broken shards of saronite to create deadlier Ghouls and later in

[80D] Tempering The Blade and

[80D] Tempering The Blade where it was said "that jagged saronite edge is brittle and will shatter the moment it strikes anything" unless it was properly tempered.

The side effects of saronite mining 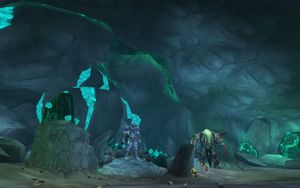 The Saronite Mines in Icecrown, which contain both solid and liquid saronite.

Often, mortals who mine saronite for prolonged periods of time appear to be driven insane. Indeed, many of the people who have been rescued from the Saronite Mines tell of hearing strange whispers of unknown origins, attempting to shape their perceptions of those around them. Others became enraged and simply attacked their would-be rescuers at the very suggestion of being taken away from the "Master", while still others yell madly about their mysterious "Master", and attempt to offer their lives to it by hurling themselves down into the deep recesses of the mines.

Players who spend time in the Saronite Mines of Ymirheim in central Icecrown or Whisper Gulch in the Howling Fjord will begin seeing whispers of unknown origin appearing in their chat logs.

It was confirmed by Blizzard officials that wearing saronite does NOT affect Knights of the Ebon Blade.[citation needed]

The Ashen Verdict appears to have found a way to bend saronite to its own will, however.

The major user of saronite is the Scourge, who utilizes this evil metal to its full potential. They have used this metal to power their war machine and construct their master's stronghold, Icecrown Citadel, as well as the ramparts, spires and cathedrals that practically cover the Icecrown region. The Scourge, in the laboratories of the Fleshwerks, have also begun implanting broken shards of saronite into the bodies of ghouls, resulting in much deadlier minions in the Scourge legions. The Lich King has even commissioned the construction of a necropolis, Malykriss, which would be made completely of saronite.

Saronite is also used by both the Scourge and by player characters of the Alliance and Horde to craft armor and weaponry. In the Scarlet Enclave, the skeletal archers led by Orithos the Sky Darkener used saronite-headed arrows to rain death on the citizens of Havenshire (and, in

[55] Tonight We Dine in Havenshire, sends death knight players to retrieve them). Because of the rarity of the metal outside of Northrend, saronite armor was only given to death knights of Acherus who truly proved themselves in battle against the enemies of the Scourge. 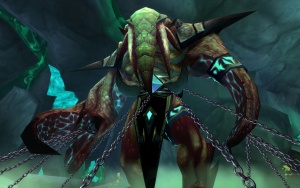 The Faceless Ones, creatures created by Yogg-Saron,[citation needed]  appear to be partially comprised of saronite as well. General Vezax, the Faceless General, gives off saronite Vapors and says, "The black blood of Yogg-Saron courses through me!" Other faceless ones are depicted with saronite-colored blood in their veins.

[Chunk of Saronite] is used in a quest.