Riddle of the Hivemind 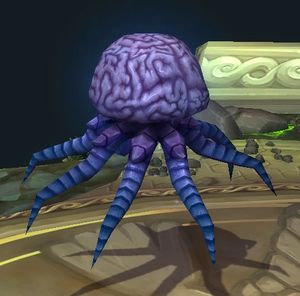 The Riddle of the Hivemind is a puzzle to obtain

This set of instructions just contains the highlights of what needs to be done but doesn't explain the puzzle or the solution.

With the talisman equipped, many creatures of the deep are now willing to trade their local goods with you. These goods will not last forever, and as such, planning is needed to make the deal with the eloquent murloc in time. Rare goods last an hour, whereas uncommon goods perish after only 30 minutes and common goods will go bad after just five minutes. The creatures are found in the locations listed below.

An AddOn, such as the Hivemind HoO Puzzle Helper may be useful to solve this puzzle.

Go to Skyreach and defeat High Sage Viryx. Behind her is a set of "Basic" Instructions. These cryptic writings will provide hints on how to operate the nearby device successfully. The Small Glowing Orb starts the puzzle and resets the position of the Eye. The Glowing Orbs server as directional keys.

To obtain the Blue Crystal monocle, a letter trail must be followed. To keep track of the letters, this command may come in handy: