Riders on the Storm (WC3 demo)

Riders on the Storm is the chapter three (3) of the prologue campaign, Exodus of the Horde, in Warcraft III Demo and the chapter one (1) of the custom campaign of Warcraft III: The Frozen Throne. 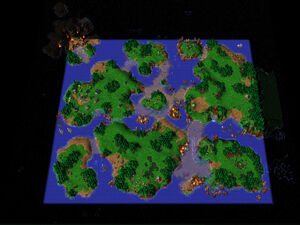 As Thrall and his companions set out for Kalimdor in their fleet of stolen ships, they are beset in the open seas by a sudden, fierce storm. To prevent the ships from taking a heavy pounding, Thrall orders the fleet to seek shelter in the cove of a nearby, remote island.

Thrall and his warriors are looking at their ships.

Thrall: "It was lucky we happened onto this cove. I don't think our ships would have held out much longer in that storm."

Grunt: "Warchief, half of the ships are missing, and the rest are badly damaged."

Thrall: "We had better get settled, then. We may be on this island for awhile."
Two Shamans approach Thrall.

Shaman: "Warchief, I sense strange magic all around us."

Far Sight-ability which is able to reveal invisible units. It reveals some Sentry Wards within the base.

Thrall: "There's the source of your magic. Someone is watching us!"

Sen'Jin: "It is you!"
Sen'Jin, accompanied by two Troll Headhunters, appears on a nearby hill.

Sen'Jin: "I saw your arrival in a vision! Especially you... the Seer. Or is it just my old mind playin' tricks on me?"

Thrall: "Looks like this troll's been on the island a little too long... We're real enough, old one. My name is Thrall."

Sen'Jin: "I be Sen'Jin, leader of the trolls. This island used to be ours alone, but no more. You and your friends must be careful; the humans established an outpost on this island some time ago."

Thrall: "Humans?"
The cinematic shows the player the human base.

Sen'Jin: "Yes! They hound us day and night! Their patrols be all over the place. It not be long 'til they find you too!"
The cinematic returns to Thrall and Sen'Jin.

Thrall: "Well, I'd rather find them first! We can't risk their patrols' alerting the outpost about us! Lok-Tar, my brothers! We're moving out!"

Sen'Jin: "Good luck, my friend! I got important matters to tend to, but I be seein' you soon."
Sen'Jin walks away, leaving the two Headhunters with Thrall.

Troll Headhunter: "Hey, mon. Sen'Jin told me you help us get rid of the humans! You know, this fountain once healed whoever drink from it, but strange gasses from underground been foulin' the water. With a few ingredients, Sen'Jin can make a purifying potion. Maybe you can help?"

Sen'Jin: "Hello again, outlanders! These ingredients be exactly what I need."
Sen'Jin purifies the fountain.

Sen'Jin: "Now our warriors can heal themselves! Let me give you a little something for the trouble."
Sen'Jin places a Healing Ward in front of Thrall.

Sen'Jin: "These wards contain healing magic. No doubt you'll find them useful."
When the cinematic ends, Thrall has Healing Wards in his inventory.

The orcs destroy the human base.

Thrall: "For the Horde!"
An army of murlocs emerge from the sea.

Thrall: "Watch your backs! This battle's not over yet!"

Troll Headhunter: "The fish-creatures have come to take us away!"
The Murloc Sorcerer appears before the prisoners.

Murloc Sorcerer: "Your meddling magics will no longer interfere with our plans, land-dweller."
The prisoners are led into a cave to the north-west.

After making it halfway to Kalimdor, the Horde forces land on the Darkspear Islands, near the Maelstrom. The orcs' ships were badly damaged and need to be repaired before the journey may continue. Soon after landing, the orcish shamans detected magic around them and found out some troll sentry wards. The trolls' chieftain, Sen'jin, revealed himself and told the orcs that humans had landed on the islands too and are now were hunting his tribesmen. The orcs and trolls agreed to join forces and set up a base to defend themselves from the humans. As soon as the basic camp was set up, Thrall is tasked by a troll to find the Seed of Expulsion and the Vine of Purification to purify a poisoned Fountain of Health. After purifying the Fountain, the orcs and trolls assaulted the humans' base, led by an Archmage. Before managing to destroy the whole camp, murlocs led by a Murloc Sorcerer appeared and net the humans, trolls, and orcs. They were then taken to a cave to be sacrificed to a mysterious Sea Witch.[4]