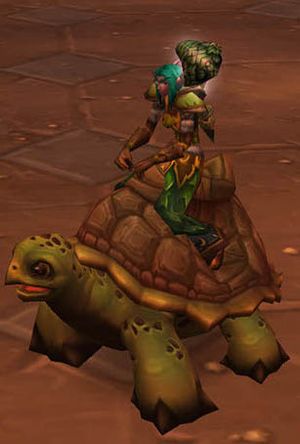 The Riding Turtle is obtained by finding a rare Saltwater Snapjaw "Loot Card" from the Heroes of Azeroth expansion set of the World of Warcraft Trading Card Game from Upper Deck Entertainment. The card has a scratch-off code which is used to obtain the item. Originally, a given code would only give you one turtle on one character on one server, so you wouldn't get it on all your characters (unlike the collector's edition companions).

The Saltwater Snapjaw card comes in both loot and ordinary forms; only the loot version has the scratch off code. The card is apparently extremely rare and sells for as much as several hundred dollars on eBay. The initial printing of the card game sold out almost immediately, making these cards even rarer.

The Riding Turtle was originally simply for looks. While mounted on the turtle you move at normal running speed, though you are actually mounted so effects that affect run speed do not operate but effects that affect mount speed do. When the aquatic mount system was added in with the

[Sea Turtle], that was likely when the Riding Turtle also became an aquatic mount.

The mount can also be acquired through the

"Summons and dismisses a rideable turtle. It may be slow, but it gets you off your feet!"

Slow and steady might not always win you the race but it'll get you there... eventually.

When the player upgrades their Fishing Shack in their garrison to Level 3, they have a chance to fish up a

[Frostdeep Minnow]. These can be used to summon a Lunarfall Cavedweller/Frostdeep Cavedweller which has a chance at dropping the Riding Turtle.

This mount also has a chance to be listed on the Black Market Auction House by Landro Longshot, for the opening bid of 15,000

Before version 2.0.x it was ordinary "white" item. After 2.0.x patch it was made into an Epic (purple) item. The effect of the item was not changed, but you no longer have to worry as much about accidentally deleting it as it is now protected by the item deletion confirmation prompt.

Besides being a potential loot card, the Saltwater Snapjaw card is also useful in the card game. Its ability to prevent all damage to it this turn for a cost of 3 can make it difficult to kill. [1]