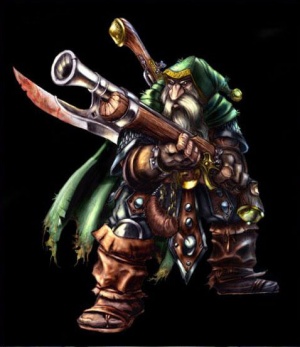 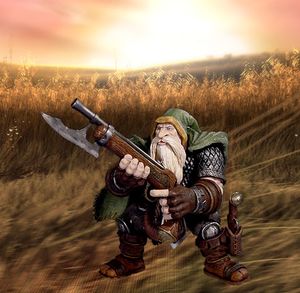 Riflemen are highly skilled sharpshooters[1] armed with rifles. While dwarves were among the first to invent and use them, many races since took up these weapons.

The brave dwarven riflemen have faithfully protected their mountain kingdom of Khaz Modan for hundreds of years. Yet, as new threats arose to threaten their hard-won freedom, they offered their expert skills and tenacity to the Alliance. Using the legendary single-shot Blunderbuss Long Rifles, riflemen are excellent marksmen and can shoot both land based and airborne opponents.[2]

Many dwarven riflemen take up the role of mountaineer.

Deadeyes are orc riflemen introduced by the Kor'kron of the True Horde but later also deployed by the Iron Horde and the Fel Horde of Draenor, using modern firearms against the enemies of their respective Warchiefs. Years later, Deadeyes can still be found in the ranks of the Mag'har. The

[Wolfslayer Sniper Rifle] is common among their ranks.

A rifleman's tactics are fairly basic; find a nice corner from which he can survey as much of the surrounding area without being spotted as possible, plot an escape route, and wait for his target to walk into his sights.[3]

The dwarven rifleman is a native of the Ironforge clans who specializes in use of the long rifle. Typically, they use their climbing skills to work their way into a good vantage point, then rain death upon their enemy from above. Riflemen usually have long beards and wear blue, hooded cloaks. They carry a long rifle against their shoulder and scowls on their faces. Riflemen are dwarven sharpshooters.[3]