This article is about the rift located underneath the Maelstrom. For the Nexus subzone, see Rift (Nexus). For the destroyed remains of the Dark Portal briefly called the Rift during the Second War, see Dark Portal.

A rift is located beneath the Maelstrom. During the Great Sundering, as if struck by a giant hammer, Zin-Azshari and the Well of Eternity were blasted downward toward the ocean floor. The Well pierced the planet's molten core just before being utterly obliterated.[1]

As it was driven downward into the sea, the Well of Eternity continued to collapse in on itself and was finally obliterated. Its violent destruction has left behind a deep trench on the ocean floor that reaches all the way to the planet's core. To this day that core remains exposed and heats the ocean's cold waters. The magical energies that still emanate from the trench have caused monstrous mutations in all nearby living things.[2] 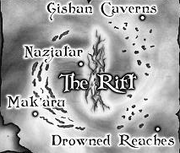 The Rift in the center of the Maelstrom's Eye.

At the end of the War of the Ancients, the powers released in the Well of Eternity blasted the well downward, smashing through seawater and rock, driving it into Azeroth's molten core. Ten thousand years later, that core is still exposed. The well's descent broke an enormous fissure in the ocean floor, and red and orange light from lava is visible deep, deep down. Although there is an incredibly high pressure, naga are capable of swimming in it with just few problems. The Well's descent also destabilized the seafloor for miles around, causing the thermal activity that characterizes the region to this day. If not for the Sundering, this area of the sea would be chill, perhaps freezing. But now, even near the surface, is pleasantly warm, increasing to uncomfortable, dangerous, and even lethal heat in places.

Nazjatar was constructed on the sides of the Rift. Although Brann Bronzebeard could not go too far down into the Rift due to the pressure, he said that "Perhaps the Well of Eternity still exists, in some form, in Azeroth's heart, for arcane currents emanate from the Rift."[3]

In Cataclysm, the entrance to Deepholm may be directly related to the energies emitted by the Rift, and may or may not be at a depth that is inside of the Rift itself. The exposed seafloor would have come from its edges.