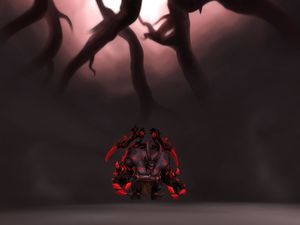 The Rift of Aln.

The Rift of Aln is a vast, deep fissure in a small corner located deep within the Emerald Dream, from which it is thought by the druids that the Dream itself originated. The druids also believe that it bleeds into the Twisting Nether and the Great Dark Beyond.[1] Players enter the rift through Lake Elune'ara[citation needed]  in the Emerald Dream's counterpart of Moonglade.

Gazing into it, Malfurion Stormrage saw it as a bottomless chasm which radiated with primeval energies that even he dared not investigate. Indeed, the very rift itself seemed half-dreamed, for it had a surreal quality to its expanse and to the archdruid now and then seemed to ripple as if ready to fade or change.

Curiously, only then did Malfurion truly sense that the ancient evil, though it fought to keep its grip there, did so from somewhere deep in the depths of Azeroth's own seas.[2]

Malfurion and Tyrande Whisperwind cleansed the Emerald Dream everywhere, except in the rift where the Nightmare stubbornly held firm. There was no point to keep pushing, as the people of Azeroth still needed the couple's help. Thus, Malfurion sealed off the vicinity around the rift, he and Tyrande silently agreeing that the day had been saved, and this was another war that would have to wait for a better time. Xavius's spirit was also sealed inside the Rift of Aln.[3]

During the war in Draenor, Archimonde held a fragment of power from the Rift of Aln, and the revelation disturbed Malfurion greatly. Believing it to be a terrible portent, he set off for Val'sharah, where he was first trained as a druid.[4]

In order to rescue the demigod Malorne from the Emerald Nightmare, the Archdruid, Remulos and the druids of the Dreamgrove stepped through a portal to the Rift of Aln that lay abandoned in a dark corner of the Emerald Dreamway.[5] They stepped into a recreation of Malorne's memory of the War of the Ancients. They helped Malorne relive his fatal encounter with Archimonde, and saved him from the Nightmare's grasp.

Later, during the class orders' assault on the Emerald Nightmare, the heroes of Azeroth followed Xavius into the Rift of Aln, where he was defeated.