Rimblat Earthshatter is a tauren quest giver located in the Eastern Plaguelands. He is affiliated with the Earthen Ring. He believes that the Plaguelands is not beyond saving.[1] Prior to the Cataclysm, he was found at Light's Hope Chapel aiding shaman with The Earthshatterer set. 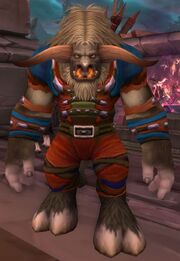 Earthshatter appears at the Battle for Light's Hope Chapel during

[55] The Light of Dawn as a level 75 elite. Unlike most of the named mobs in the fight minus the Argent Defenders, both Rimblat and Rayne can be taken down if they are heavily focused on. However, they will merely fall unconcious, rather than outright die. When the Lich King kills several members of the Argent Dawn, Rimblat is one of them. Afterwards he is resurrected prior to the quest's ending.

He also appears at the Argent Stand in Zul'Drak as a level 74 elite. He and Rayne do not give any quests here in Northrend, but are interactable and will speak of how devastated Zul'Drak is.

After the Cataclysm, he returned to Light's Hope Chapel and can be recruited to join Fiona's Caravan.

He appeared on Draenor with Fiona and her caravan. While there, he was trapped by the botani but soon rescued by the Alliance commander.

He formerly offered the following quests for the shaman's Tier 3 Earthshatterer gear set:

Rimblat Earthshatter says: Watch, druid. The earth still breathes. It yearns to be cleansed.
Rimblat causes a flower to sprout from a small dirt mound in front of him and Rayne, who applauds him.
Rayne says: That is wonderous, Rimblat! Even this foul, sundered earth is not beyond healing.

Excuse me, old habit. I am Rimblat of the Earthen Ring.

What brings a tauren to the Plaguelands?

In the last war, tauren fought. Shaman were sent in defense of this world against the Scourge invasion. Most lost their lives. Many were otherwise ripped asunder, their body parts used for foul experiments in that cursed citadel. I mourn their passing but my heart swells with pride at their courage.

I was a young tauren, barely having reached adolescence at the time, but I knew that those that would brave the battles for our freedom were well protected in my namesake's vestments.

The name of Earthshatter has been one held by my family for hundreds of years. And like my father and his father before him, I too have inherited the right to create the vestments of my namesake.

Zul'Drak
Can you hear it, <class>? The elements cry out that this land is almost dead. The Drakkari are stealing the power of their gods by killing them just to defend themselves against the Scourge.

They are short-sighted and will be their own undoing in the end.

He may be related to Gauros Earthshatter.