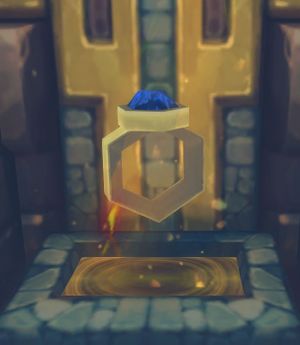 The Ring of Tides.

The Ring of Tides is an ancient artifact of extraordinary power[1] that the loa Eraka no Kimbul claimed as his trophy when he killed the naga leader Summoner Mepjila[2] in Vol'dun centuries ago.[3][4] The ring was stored in the Statue of Eraka No Kimbul on the Terrace of the Fang[5] and many years passed without anyone being found worthy to wield the relic.[4] Eventually, Queen Azshara sent an army of Stormcoil naga to Darkwood Shoal to reclaim the ring, which she considered highly important to her plans.[6] The Stormcoil drove away the Tortaka tortollans that dwelled at the shoal, causing the tortollans to seek out the nearby Temple of Kimbul to ask the loa for help. However, upon arriving, Teekcha and Tulu found the entrance to the temple to be sealed by a magical barrier.[7] Teekcha's scrolls indicated that the barrier could only be lowered by one who had gained the Ring of Tides. When an adventurer arrives, they seek out the statue of Kimbul, successfully pass the loa's Trial of Wisdom, and are rewarded with the ring,[5] allowing them to enter the Temple of Kimbul.[4]

This item is rewarded from