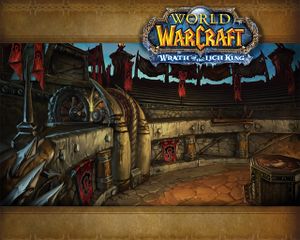 The Ring of Valor, also known as Orgrimmar Arena[citation needed]  and the Coliseum,[1] is an arena located in the Valley of Honor in Orgrimmar and was added in Wrath of the Lich King.

The interior of the Ring of Valor, now called Brawl'gar Arena, is now accessible via portal for everyone who joined the Brawler's Guild.

The arena is large and oval formed with players starting on each side. There are four roughly circular platforms at that rise and lower, two at a time throughout the match, obstructing movement and blocking line of sight when raised. Because they are essentially temporary pillars, they create an ever-changing dynamic of line-of-sight and kiting opportunities.

Prior to patch 4.2.0, the staging areas were in the middle of the map and would slowly rise out of the ground until they emerged at ground level, mere yards apart. Players were hidden during the waiting period, but started 10 yards next to each other.

There were only two pillars, moving up and down like they do today. There were also two sets of spikes on triggers for when the pillars moved, which dealt damage and blocked line of sight. On either side of the staging platforms was an intermittent fire wall that blast from the ground. The two fire walls triggered at the same time and inflict damage equal to a percentage of total health per second to anyone passing through or standing within the flames. The walls did not otherwise break line of sight or inhibit player movement.

The original Ring of Valor 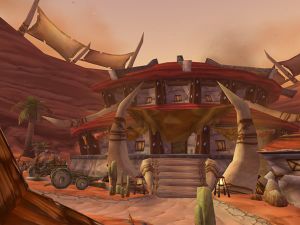 Ring of Valor before the Shattering. 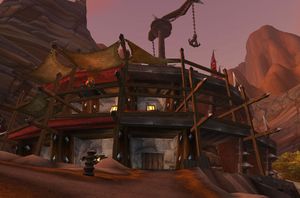 Ring of Valor right after the Shattering.

Earlier in the game, the arena was an in-game zone in Orgrimmar. It looked quite different and only the spectator area was accessible. It was supposed to serve the same purpose as the Gurubashi Arena, except there would be no treasure in the middle.[2] This feature never got implemented however, and the only purpose the old Ring of Valor ever served was a duel between Thrall and Garrosh Hellscream during the Scourge Invasion prior to Wrath of the Lich King.

It was also used to train some of the Crimson Ring's gladiators.[citation needed]  Here, the Garad'kra was officially formed by Battlemaster Bröng.[3]

During the Shattering the arena took heavy damage and is currently being repaired. The interior has been closed off to the general public.

The inside of the ring was later refurbished as the Brawl'gar Arena.

Here warriors fight to honor the Horde, not for the amusement of bloodthirsty crowds. Young orcs practice here with blunted weapons, but occasionally fight to severe injury or death.[5]