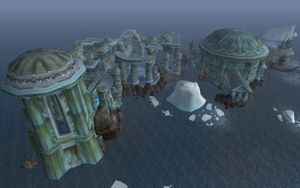 The Riplash Ruins are found at the southernmost portion of the Borean Tundra, in a small cluster of islands not far from the Riplash Strand on the mainland. These night elven city ruins have a shrine that looks like a temple of Elune, but with a statue of Queen Azshara in it. Raj Naz'jan was the emperor of the Riplash naga 500 years ago.

Recently, the Skadir wiped out most of the naga here (leaving only Veehja) and took the ruins for themselves, using them as a staging ground for attacks on the Borean Tundra. They have plans to revive Leviroth. Ragnar Drakkarlund can be found here. 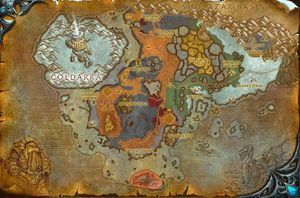 The bulk of the Riplash Ruins are a night elven archaeology dig site.

The Riplash Ruins in Lands of Mystery.

The Riplash Ruins is an old ruin standing at the Borean Tundra's south end, in the southernmost tip of Northrend. The ruins appear to be of nerubian architecture oddly located above ground, mostly. It is speculated that there was an erathquake long ago, possibly the result of magma beneath, and this section of Azjol-Nerub got shoved up to the surface. Regardless, nerubians are not there now, and a pack of naga moved in some time ago. They are nasty and attack anyone who gets within range. Fortunately there is no reason to venture down there as you can reach the ocean just as easily all along the tundra's shore.[1] The Riplash Ruins give the naga a perfect view of anyone approaching across the ocean from the south.[2]