Rise of the Naga (WC3 NightElf)

Rise of the Naga is chapter 1 of the Terror of the Tides campaign.

It was a confrontation between Maiev Shadowsong's Watchers and Illidan Stormrage's naga and satyr followers, soon after discovering remains of the first battle between the recently summoned naga followers of Illidan Stormrage and the defenders of the night elf port town of Nendis.

Though the demonlord, Archimonde, and the Burning Legion were finally defeated at the Battle of Mount Hyjal, much of Ashenvale Forest remains tainted by foul, demonic energies. The combined efforts of both the druids and the Sentinels have brought a tenuous peace to the northlands, but dark creatures still lurk within the shadowed woods. In this perilous time, Maiev Shadowsong, the warden who once guarded Illidan's barrow prison, has come forth to hunt her dangerous prey--and chain him once again beneath the cold earth.

In order to recapture Illidan, who according to Maiev has become something more than Night Elf or Demon, Maiev Shadowsong splits off two scouting parties to find Illidan and report back to her. In the meantime Maiev personally leads her own forces on the hunt for Illidan. In time Maiev encounters a serpent race known as the Naga, who to Maiev's surprise seem to know of the Night Elves. After fighting their way through the Naga and reuniting with their scouts, Maiev is forced to witness Illidan fleeing from Kalimdor to an unknown destination. Determined not to give up on her hunt, Maiev and her forces board the remaining ships at the port town of Nendis and set sail after him.

Illidan has sewn a path of destruction along the coastline. Hunt the Demon down and recapture him before he harms any more innocent civilians.

Illidan has taken to the sea, and you must follow. His Naga minions have begun to set fire to the few boats that are left. You must save at least 2 ships, or you will not have a sufficient force to give chase.

The animals of the wild have gone berserk due to Illidan's presence. One animal in particular is causing a great deal of trouble--a fearsome Wildkin. Put the creature to rest so that it can do no more harm.

The vile Satyrs have captured several members of Maiev's scout party. Find the Satyrs, and destroy the cages to free your sisters from the Satyrs' vile clutches.

Maiev and the Watchers arrive to the eastern edge of Ashenvale. Much of the land is still corrupted or burning.

Maiev Shadowsong: These tracks are fresh, but they split off in opposite directions. Illidan must be getting help from someone.

Maiev Shadowsong: You Watchers split up into two parties. Scour the woods. Find what you can. We'll meet you further up the coast.

Maiev Shadowsong: Remember, sisters--if you find Illidan, do not attempt to take him without the rest of us. He is far too dangerous to tackle alone.

Archer: That village has been razed!

Archer: The bodies have been mutilated. Do you suppose demons did this?

Maiev Shadowsong: Illidan's stench hangs heavily over this place, but those tracks were not made by any demons I know of. Be wary, my sisters. There's no telling what horrors Illidan has called to his side.

Archer: Mistress! The furbolgs have succumbed to the forest's corruption! It's as if they've lost themselves to mindless rage!

Maiev Shadowsong: Their tribes suffered greatly during the Legion's invasion. They cannot be saved.

Maiev Shadowsong: Ambush! The satyrs are attacking! Drive the foul brutes back!

Maiev Shadowsong: So Illidan sent you foul satyrs to slow us down? He must be getting desperate.

Archer: There, mistress! Those must be the creatures we're after.

Naga: Wretched night elves, you are no match for the naga!

Maiev Shadowsong: Naga? Many craven races have tempted our wrath over the centuries. None have survived!

Naga: Wretched woman. We will retake the surface world and put an end to your vile race once and for all.

Maiev Shadowsong: These poor folk were slain just like the others. Illidan has much to answer for. He'll wish he were still chained in his cell when I get through with him.

Naisha: But these wrecks... Why would they destroy ships?

Maiev Shadowsong: I don't know. Wait--he may have taken to the sea. Hurry, sisters! The port of Nendis lies to the north. Perhaps there we can find a ship and set sail after Illidan.

Maiev Shadowsong: We're getting close. I can smell something vile upon the wind.

Naga: Quickly, you fools! The ships must be burned. The master doesn't wish to be followed.

Maiev Shadowsong: I cannot allow Illidan to escape again! We must slay those naga before they burn the ships.

Naga: You are too late, little warden. The master has already set sail for distant shores. However, he wished to thank you for the hospitality you provided during his imprisonment. He asked us to repay you... in kind.

Huntress: Mistress Shadowsong! We're lucky to have found you!

Huntress: My party was attacked by a bloodthirsty Wildkin. Apparently Illidan's passing drove the creature mad. There's no telling how many more innocents it might harm!

Maiev Shadowsong: This madness must end! We will find the creature... and put it down.

Maiev Shadowsong: That's the creature we're after! Slay it quickly and put it out of its misery.

Huntress: Mistress Shadowsong, thank Elune! A band of satyrs captured the rest of my party. The twisted brutes are holding them in nearby woods.

Maiev Shadowsong: We will find them.

Satyr: Bah, night elf Watchers! I knew there were more of them skulking around out there.

Maiev Shadowsong: You will release my warriors immediately.

Satyr: I think not, woman. The master tires of your games. The chase ends here.

Naisha: Mistress, do you believe we can defeat Illidan even if we find him?

Maiev Shadowsong: Illidan has grown powerful: of that, there is no doubt. He consumed the energies of the Skull of Gul'dan. Now he is neither night elf nor demon, but something more.

Archer: Mistress, why would the naga harbor so much hatred for us?

Maiev Shadowsong: We must trust time to reveal all things. Now hurry. Illidan has a considerable lead on us. We must capture him before he causes any more harm.

Maiev Shadowsong: The forest is too still. Nothing stirs. The creatures we hunt must be terrifying indeed to cow the very breath of nature.

Naisha: Look there, at the shoreline!

Naisha: The tracks lead off into the sea and then reappear back on land... What are these creatures? 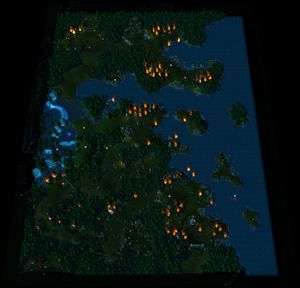