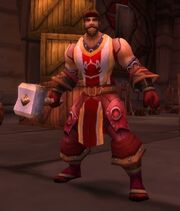 Risen Hammersmith is a level 46 undead human blacksmith found in Stratholme Main Gate. Before the Cataclysm, he was known as Crimson Hammersmith, he was not worth mentioning, but since he was risen the dreadlord Balnazzar taught him how to make all sorts of powerful demonic weaponry.

Originally, he was known as the Crimson Hammersmith and was level 60 elite human. He did not appear normally in the instance but would appear and attack when a player tried to pick up the Blacksmithing Plans.

The Blacksmithing Plans could randomly appear in at least two known locations in Stratholme.