Remove the thorn from Shen-zin Su.

Wait, what?! How could he be so reckless? Blowing the ship free is insane! They could kill Shen-zin Su, and all of us with it.

I know we don't have much time, but we need to think of another way...

The first step is done, but now we must save Shen-zin Su! 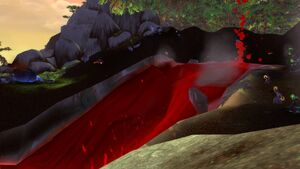 The massive wound in the side of Shen-zin Su.

Aysa Cloudsinger says: Ji may kill Shen-zu Sin if we let him go through with this! Come with me, <name>, quickly!
Aysa runs up both flights of stairs and then astern toward the wheelhouse, where Ji is standing by near the explosives prepared by Makael Bay after

A cutscene takes place shortly after:

The explosives set on the Skyseeker's broken deck detonate, causing the entire aft section of the ship to fly off the side of the Wandering Isle and break into pieces. As the smoke clears, the island shakes as Ji searches for Aysa. He finds her kneeling, staring into the smoke.
Ji Firepaw: Aysa...
As the smoke clears, it reveals a massive wound in the side of Shen-zin Su, gushing blood.
Aysa Cloudsinger: He is dying.
Aysa begins to cry. Ji comes forward from behind and as she stands, places a comforting hand on her shoulder.
Ji Firepaw: His wounds can be healed.
Aysa is not comforted at all, her tone cold and clearly putting the blame on Ji and his plan. As she speaks, Aysa gives Ji a glare over her shoulder.
Aysa Cloudsinger: I hope you can forgive yourself...for what you have done to him.
Looking away, Aysa shrugs off Ji's hand as she walks off, leaving him looking sad but resolute, as Shen-zin Su lets out a groan of agony.

Coming out of the cutscene, a full-fledged battle is taking place! Speak to Ji.