From Wowpedia
(Redirected from Ritual of Refreshment)
Jump to: navigation, search

Conjure Refreshment Table is a level 72 mage spell that creates a Refreshment Table. Friendly players can interact with the table to gain a stack of conjured refreshments, similar to a Soulwell. As with

[Conjure Refreshment], the exact type of refreshment granted varies depending on the mage's level, with level 100 tables providing

[Conjured Mana Fritter]. The table will last for 3 minutes or until 50 stacks of refreshments have been handed out.

Essentially a convenient group alternative to

[Conjure Refreshment], the table's primary use is in parties to save the mage from spending excessive amounts of time conjuring refreshments. The refreshment table is commonly referred to as a "mage table". 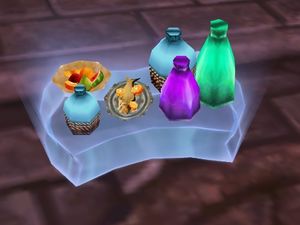 Refreshments are provided in stacks of 20. The maximum amount of any type of conjured refreshment a character can have in his/her inventory is limited to 80 (4 stacks). Refreshments are conjured items, and as such will disappear after being logged out for 15 minutes.

Below is an incomplete list of the various refreshments provided by the table:

The refreshments provided by

"Mage tables" are often requested by players at the start of battlegrounds, while the team is preparing. Mages who are able should go to the trouble of conjuring one, allowing their teammates to stock up on refreshments. This can help reduce downtime in the battleground, improving their team's chances of success. Mage tables are usually appreciated by players, saving them time and money otherwise spent acquiring food and drink, and the refreshments provided can also be consumed outside the battleground such as while levelling or doing dailies. Players who see a mage table should do their best to take advantage of it, ideally acquiring the maximum 4 stacks for use in the future.

This spell was introduced in Patch 2.3[1][2] as Ritual of Refreshment. On the PTR, it originally required a [Rune of Portals (original)] to create, but this was changed to [Arcane Powder] during testing. Channeling the spell created a portal which party members could click to assist in the summoning of a Refreshment Table; two party members were required to join in channeling the effect in order to summon a table.

[Conjure Food] (Rank 8). These spells used to be only learnable from two rare books, Tome of Conjure Water IX and Tome of Conjure Food VIII, respectively, which dropped in level 70 instances. With Cataclysm this requirement was removed, and the spell made available to any mage of the appropriate level.

Patch 5.0.4 simplified the spell substantially, changing it from a channeled summoning effect to a simple 3 second cast. Other players were no longer required to participate in order to complete the cast, and the reagent cost was removed. The name of the spell was also changed at this time to Conjure Refreshment Table.