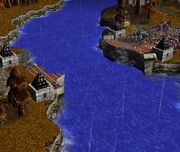 The river after the destruction of its bridge.

On the bridge leading out of the village, the night elf priestess Tyrande Whisperwind, having traveled to Lordaeron to hunt down Illidan Stormrage, made a stand against the Scourge in order to save a retreating force of blood elves led by Prince Kael'thas. She succeeded in holding the undead back, but was swept downriver as the bridge collapsed.[1]

Later, Malfurion and Illidan's forces both searched the banks of the river as the Scourge was tracking down the missing priestess. A dam had been built there by the Shadowglen Trolls. The twin brothers eventually managed to defeat the undead and find Tyrande, despite the enmities between night elves and naga.[2]

River Arevass is notably absent from the Pyrewood region in World of Warcraft.

The fact that Tyrande Whisperwind fell into the river close to the shore of the Great Sea and was found eastwards, near Lordamere Lake leads to the conclusion, that the Arevass flows from west to east. The Arevass may run out of the mountains in northern Gilneas or from the hills above Shadowfang Keep.

In World of Warcraft there is only one watercourse in Silverpine Forest, the traces of a river that was once connected to Lordamere Lake. All that remains of it is a dried up canyon and a few pools of water, with a bridge crossing it near the lake itself, however, it isn't near Pyrewood Village.

The Arevass' absence from the game may be related to reasons that aren't related to the lore, such as scale issues.