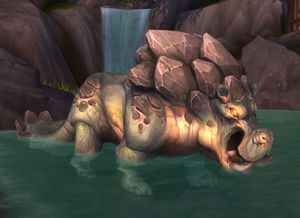 Riverbeast refers to two different types of large, hippototamus-like animals. The first type is native to Draenor and is distinguished by their rocky plates and long, club-like tails. The second type is native to Azeroth and more closely resembles real-life hippos. It is not known if the two types are related to each other. 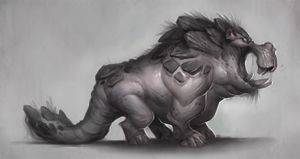 Concept art of a Draenor riverbeast.

One version of riverbeasts[1] (also called hippopotamuses[2] or hippos)[3][4] are native to the alternate Draenor and were first introduced in the Warlords of Draenor expansion. They can be found in lakes and rivers in almost every region of Draenor except for Frostfire Ridge.

Adventurers are often misled by the seemingly docile riverbeasts. Though slow to anger, once disturbed, a charging riverbeast is a ferocious sight: 4,000 pounds of fat and muscle storming toward its target like a runaway tram. Roaming draenei rangari have long been astounded by how much damage a rampaging riverbeast can take before it's brought down, and draenei children are taught to keep a wide berth of shallow waters. Riverbeasts are characterized by their rock-like skin, likely developed during the early days of Draenor's prehistory, when creatures of stone dueled for supremacy against the chaotic flora. Those looking to take a riverbeast as a trophy should take note of their durable armored flesh and tendency to charge unexpectedly.[1]

The sapphire riverbeast's color mimics the clear blue of Draenor's river shallows, making it almost invisible to aquatic predators.[5] Riverwallows are one of the heartiest beasts on Draenor, resulting in their increased stamina and distinctive coloring.[6] Aggressive and territorial, the mosshide is known for hiding in river-shore scrub and ambushing unwary passersby.[7] Special webbing that grows on the soles of the mudback's feet gives them extra traction in mud and slick terrain.[8]

Riverbeast calves are surprisingly quick when provoked, but easily calmed with a meal of

[Nagrand Arrowbloom].[9] The playful periwinkle calves enjoy scooping up a large mouthful of water and then spitting it at one another.[10] 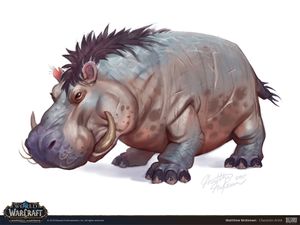 Concept art of an Azeroth riverbeast. 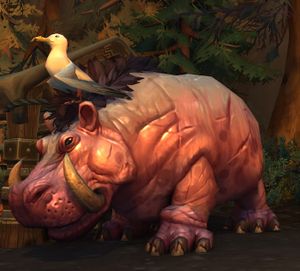 Another version of riverbeasts[11][12] are native to Azeroth and were first introduced in the Battle for Azeroth expansion. These riverbeasts are more reminiscent of real life hippopotamuses, with the exception of their sharp, protruding tusks and sparse manes of hair, and can mainly be found around bodies of water in Zuldazar,[12] Nazmir, and Vol'dun.

Riverbeasts are actually one of the most dangerous animals on Azeroth, despite their appearance.[11] Riverbeasts are inexplicably driven to eat a type of white pellet.[13]