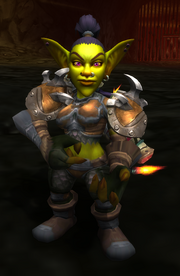 Rixxa Fluxflame is a goblin located in the MOTHERLODE!!. She led the Venture Company's attack on Blackrock Depths.[1]

Overseeing the creation of the Venture Co's supply of Azerite Catalyst, Rixxa is a reknowned chemist and gleeful pyromaniac.

Aggro
If you want a job done right... use bigger explosives!

Azerite Catalyst
Looking for Azerite? Have a face full!

Propellant Blast
I love the smell of propellant in the morning!
Safety first!